Gardner out of Moto2 race after huge warm-up crash

Moto2 star flying to Barcelona for surgery with multiple fractures. 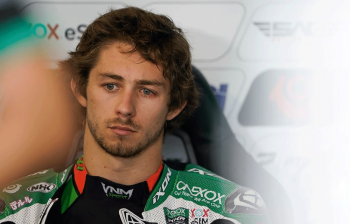 Remy Gardner was ruled out of the Grand Prix of San Marino Moto2 race at the Misano World Circuit Marco Simoncelli on the weekend after suffering a bad crash during morning warm up, breaking his thumb and fracturing bones in his foot.

After recording the second fastest time in qualifying Gardner had been promoted to pole position, taking into account the Sam Lowes penalty after last weeks Grand Prix of Styria.

A huge high side crash in the Sunday morning warm up meant he was declared unfit for the race and further medical checks revealed a broken thumb and three left foot fractures. It is unknown if he will be able to compete in the second stanza next weekend at Misano, but more will be known during the week after he undergoes surgery in Barcelona.

Although disappointed and still wanting to race, Gardner was upbeat, saying, “We were fast again in warm-up and honestly, I have no idea why I went down. It was a big crash, but I escaped relatively unhurt. I am now going to Barcelona to be operated on and I hope to be able to ride next week, but it’s too early to say for sure that I can.”