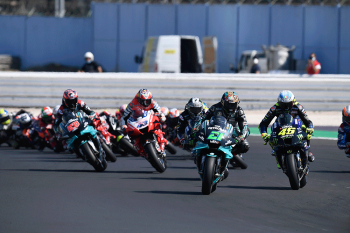 Petronas Yamaha SRT rider Franco Morbidelli has produced a stunning performance at the Misano World Circuit Marco Simoncelli in the Grand Prix of San Marino to lead from start to finish, blitzing the field for his maiden MotoGP victory.

Morbidelli took the chequered flag by 2.217s from fellow Italian Francesco Bagnaia (Pramac Racing), who celebrated his maiden premier class podium. The real scrap unfolded behind them for the final spot on the dais as Joan Mir (Team Suzuki Ecstar) produced a daring move on Valentino Rossi (Monster Energy Yamaha MotoGP) on the final lap to record his second career podium.

After qualifying second, Morbidelli was able to grab the hole shot with Rossi and the fast-starting Jack Miller (Pramac Racing) in close pursuit. After an incredible lap record for pole position, Maverick Viñales (Monster Energy Yamaha MotoGP), the only rider running the hard rear tyre, failed to capitalise and slipped back through the field. In the early stages Rossi was able to push Morbidelli and even show him a wheel at one point, but the Morbidelli response to any threat was swift.

As the race settled down after the frantic opening laps, the result of the Yamaha lockout was laid bare. Morbidelli and Rossi had cleared out while Viñales and championship leader Fabio Quartararo (Petronas Yamaha SRT) were completely off the pace. Miller was still able to push hard but his injured Pramac Racing teammate Peco Bagnaia was looking ominous,  consistently fastest on track. On lap seven, Quartararo was pushing past Viñales and heading towards the front trio before he pushed too hard and lowsided, rejoining way down the order.

By lap twelve Morbidelli was controlling the had created a gap of almost a second to Rossi, while Miller in third looked as if he was starting to fade. Bagnaia, however, was still on a charge. He had moved past Viñales, with Ducati horsepower on display down the back straight, but he still had the Suzuki of Alex Rins to contend with. The duo soon cut past Miller and were sizing up Rossi, who was now 1.8s away.

With 10 laps to go, Morbidelli had seemingly put the race out of reach to his rivals, but the fight for the final podium spot was well and truly on, with Rins and Bagnaia only a few tenths down on Rossi. Further back, Joan Mir (Team Suzuki Ecstar) had moved past Miller into sixth. He was still too far back to strike, but as Rins started probing Rossi for a way through, Mir used the opportunity to attach himself to the group. Rins tried and failed, but it was Bagnaia who struck first, perhaps finding Rins in a moment of frustration with Rossi. Next, Bagnaia picked off Rossi himself and was now in certain podium contention.

With the jostling ahead, Mir had closed the gap to his teammate. Morbidelli was well clear out front and now Bagnaia was in clear air in second position. The defensive ability of Rossi around Misano is legendary, and Rins was feeling the frustration. With three laps to go it appeared the finishing order had been decided. On the penultimate lap, Rins ended up a little bit loose at turn 15, giving Mir an opportunity. As the last lap beckoned, Rossi was sizing up a slightly off pace Bagnaia when Mir pounced, catching the Italian off guard and sealing third spot. Rossi couldn’t recover quick enough and ended his chance at a 200th podium.

Up front, Morbidelli, having weathered the storm out front, cruised to victory with Bagnaia second and Mir left to claim his second career podium. Rossi took a fighting fourth with Rins close behind while Viñales was only 1.3s adrift in sixth.
Andrea Dovizioso (Ducati Team) had ridden a lonely race to eventually pick off his teammate Miller for seventh, enough to claim the championship lead after Quartararo crashed for a second time later in the race, leaving him out of the points altogether.

Dovizioso (76) now leads the championship race by six points to Quartararo (70), with Miller a further six back (64).

Moto2 was a remarkable race before the lights even went out, with Sam Lowes (EG 0,0 Marc VDS) qualifying fastest but having to serve a pit lane start penalty after causing a crash the previous week. Next, Remy Gardner vacated pole after he suffered an intense high side crash in morning warmup, breaking his wrist and fracturing several other bones. That left the front row open for the Sky Racing Team VR46 duo of Luca Marini and Marco Bezzecchi, with the pair streaking away at the front for a thrilling battle.

Marini seemed to have the better of the fight, until a false neutral later in the race let Bezzecchi through. The pair battled in the last few laps and Marini fought hard, reclaiming position while Bezzecchi ended up in a scrap for third with Bastianini.

Lowes picked up valuable points after moving through to eighth after a pitlane start. In the championship that leaves Marini 19 points clear of Bastianini, with Bezzecchi a further ten back in third.

MotoE was taken out by Matteo Ferrari (Trentino Gresini MotoE), who has now had three wins in the last two years at Misano in the category. Xavier Simeon (LCR E-Team) and Dominique Aegerter (Dynavolt Intact GP) completed the podium in another close fought MotoE encounter, which now sees Aegerter (57) leading Ferrari (45) by eight points in the championship. Australian Josh Hook (Octo Pramac MotoE) finished out of the points back in 18th position. 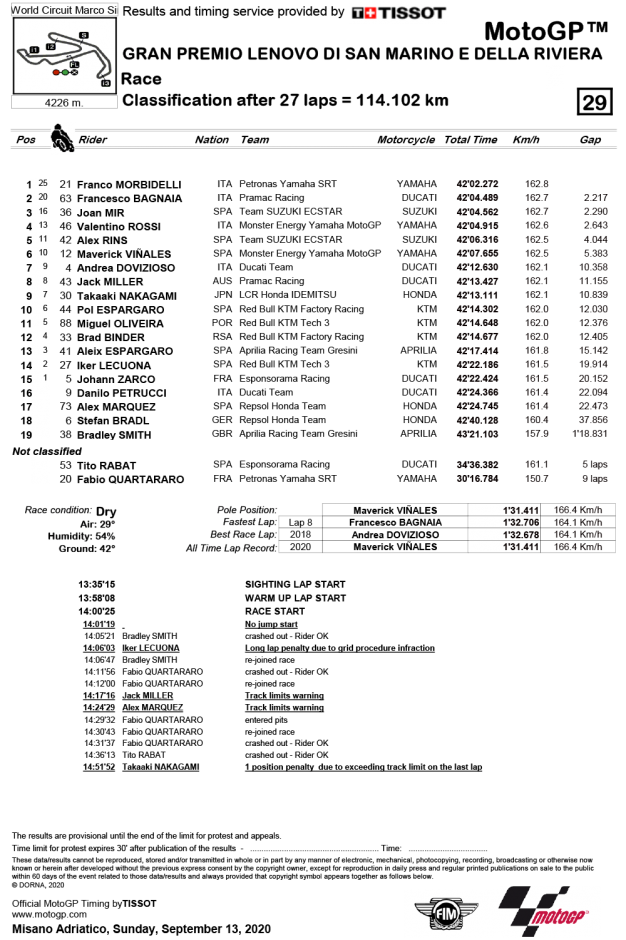 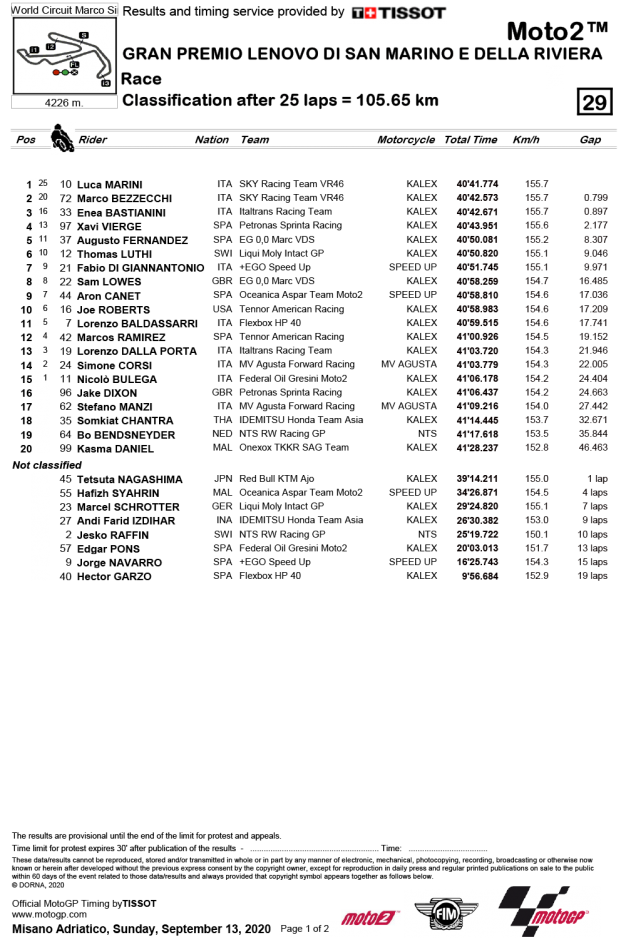 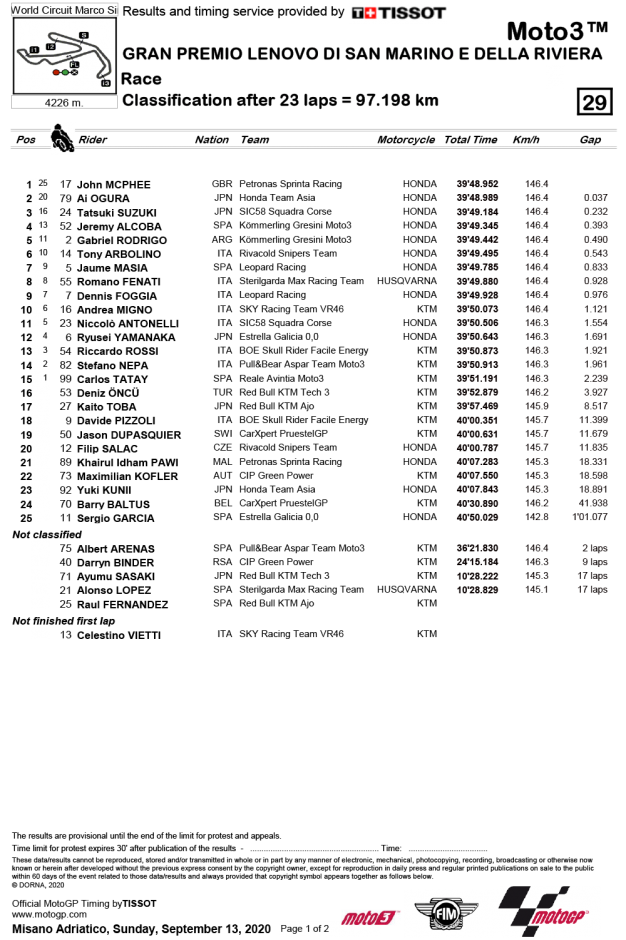 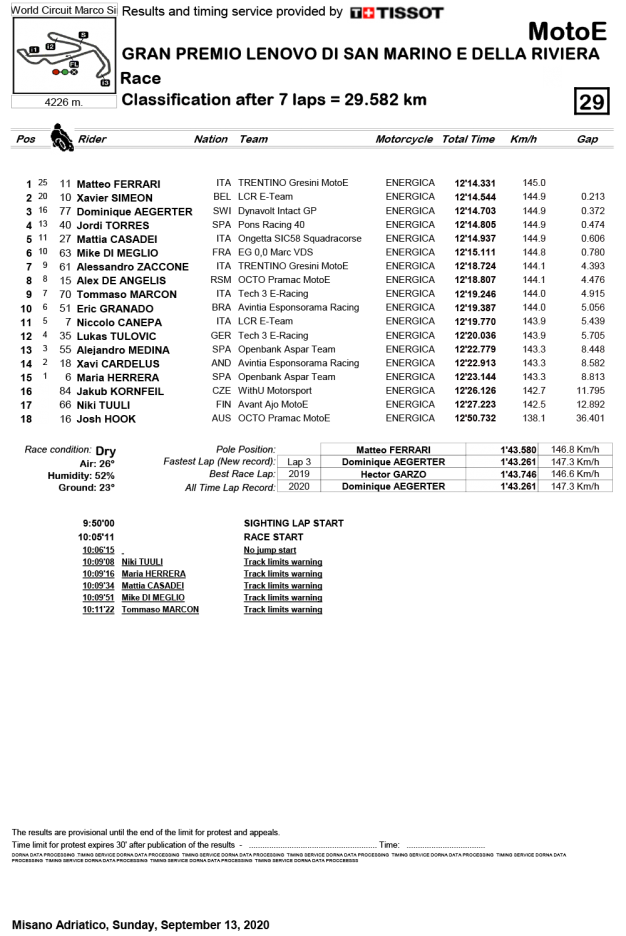