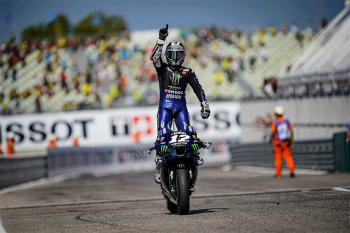 The victory propels the Spaniard to equal second in the championship standings with 83 points, just one point shy of leader Andrea Dovizioso (Ducati Team). Joan Mir (Team Suzuki Ecstar) took another podium in second place after starting from P11, with that result making him the other rider also on 83 points. Completing the podium was Pol Espargaro (Red Bull KTM Factory Racing), who managed to turn around the fortunes of the Austrian manufacturer for week two – albeit with some help with attrition from the rest of the field.

When the lights went out it was Jack Miller (Pramac Racing) who took the hole shot, but his lead was short lived, moving back in the field until an unusual incident where a visor tear off blocked his air filter. This caused a lack of power to his Ducati and he had no choice but to retire from the race.

Out front, Viñales took the initiative, only to be overtaken by Francesco Bagnaia (Pramac Racing) on lap five. Bagnaia set a strong pace out front and looked to be on track for his maiden MotoGP victory, even though Viñales was slowly bridging the gap.
Bagnaia lost the front end with five laps remaining, blowing his chances of an almost certain victory.
“I managed the tyres for the last laps because I know that Maverick is very fast in the last part of the race. At the corner six I crashed and I didn’t know why. We studied the data and we saw that I didn’t do anything wrong, the lines were the same and the inclination too,” Bagnaia commented after the race.

Behind them, last weeks winner Franco Morbidelli (Petronas Yamaha SRT) was working his way through the field as Aleix Espargaro (Aprilia Racing Team Gresini) tucked the front and collided with the Italian, with Morbidelli dead last but still able to continue.

Whilst Viñales was pushing at the front,  teammate Valentino Rossi (Monster Energy Yamaha MotoGP) was the next one down, crashing out of his 250th Grand Prix with Yamaha. Rossi remounted but eventually retired from the race.

Brad Binder (Red Bull KTM Factory Racing) was another one to crash out of contention, all the while Joan Mir (Team Suzuki Ecstar) was edging his way forward. After the demise of Bagnaia, Viñales had a solid lead back to Espargaro and Fabio Quartararo (Petronas Yamaha SRT). The fight for the podium was the focus, with Quartararo was showing a wheel to Espargaro but not able to find a way past, even incurring a warning for exceeding track limits. When Mir appeared within range, he struck first, cutting underneath Quartararo and making the move stick. Next he showed Quartararo how to dispatch of Espargaro at turn three, with El Diablo using the lesson to also get by Espargaro.

The final twist would come with one lap remaining as Quartararo was handed a Long Lap Penalty for exceeding track limits. He was well clear of Espargaro but didn’t take the penalty, meaning an extra seconds was added to his overall time, forfeiting the podium finish to Espargaro.

Miguel Oliveira (Red Bull KTM Tech3) was a little further back, not able to take advantage of the Frenchman’s misfortune, and finished fifth. Three seconds behind him was Takaaki Nakagami (LCR Honda Indemitsu), who was once again the best placed Honda in sixth. Alex Marquez (Repsol Honda Team) was just behind, taking his best result in the premier class so far and beating out the current championship leader, Andrea Dovizioso.

Morbidelli recovered from his early collision to finish ninth with the second factory Ducati of Danilo Petrucci (Ducati Team) routing out the top ten.

Ultimately, the weekend had somehow gone the way of Viñales, who becomes the sixth rider so far to win a race in the premier class during 2020. 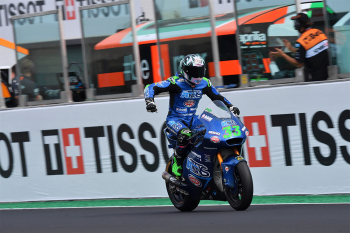 Italtrans Racing Team’s Enea Bastianini has cut Luca Marini’s (Sky Racing Team VR46) title lead down to just five points after taking victory in the rain affected Moto2 race. Bastianini, who was leading before the rain stoppage, started well in the ten lap dash but Marini had the hole shot. The pair ran wide at turn four allowing Petronas Sprinta Racing’s Xavi Vierge through. Marini was back to fifth but Bastianini had retaken the lead by the end of the first lap. By two laps to go it was seven tenths separating Bastianini and Sky Racing Team VR46’s Marco Bezzecchi. Sam Lowes (EG 0,0 Marc VDS) was close behind, but Bastianini held his nerve and that’s the way they finished over the line. Marini took fourth, holding onto the championship lead with Marcel Schrötter (Liqui Moly Intact GP) in fifth.

Romano Fenati (Sterilgarda Max Racing Team) took victory in the Moto3 race from Celestino Vietti (Sky Racing Team VR46) by a slim margin of 0,036s. It was the first victory for Husqvarna and Fenati now becomes the most successful Moto3 rider, with a higher win count than Joan Mir. “The final lap was really crazy, in the last part of the track I thought immediately on the last lap that I didn’t know where they’d overtake me, it was a bit scary,” explained Fenati. “But the feeling with the bike was really good, we were really strong on braking, I’m really happy and now it’s important to be consistent and to always be strong.”
Ai Ogura (Honda Team Asia) completed and now moves to within two points of Albert Arenas’ (Gaviota Aspar Team Moto3) championship lead.

In race two of the MotoE World Cup, Matteo Ferrari (Trentino Gresini MotoE) and the Italian has now won four of the five races in th category held at the venue.  The podium was filled by Mattia Casadei (Ongetta SIC58 Squadra Corse) and Jordi Torres (Pons Racing 40). Just 15 points covers Ferrari, Dominique Aegerter (Dynavolt Intact GP), Torres and Casadei heading into the final round at Le Mans. Australian Josh Hook (Octo Pramac MotoE) crashed out of seventh, staying with the leading group with only two laps left to run. 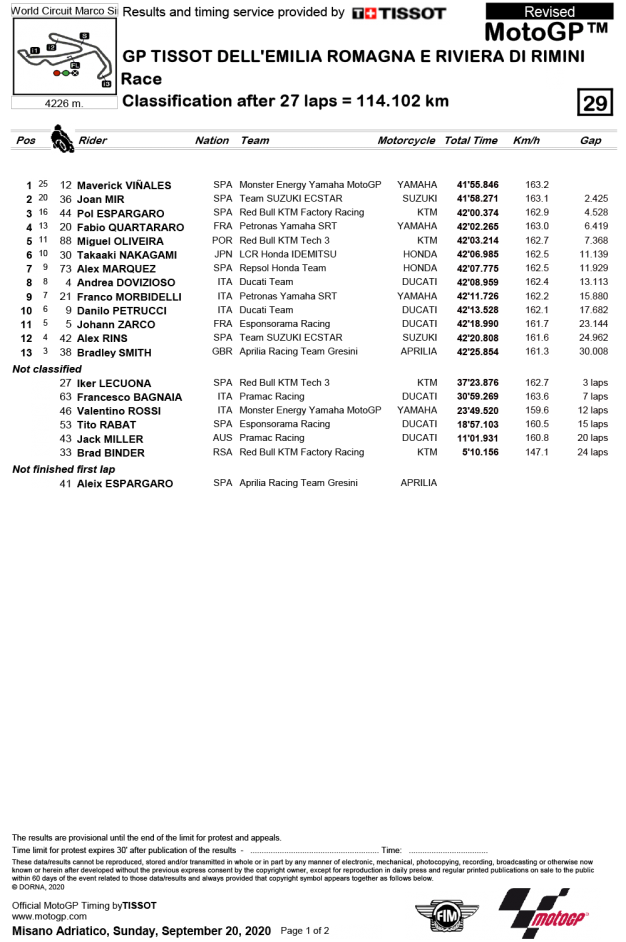 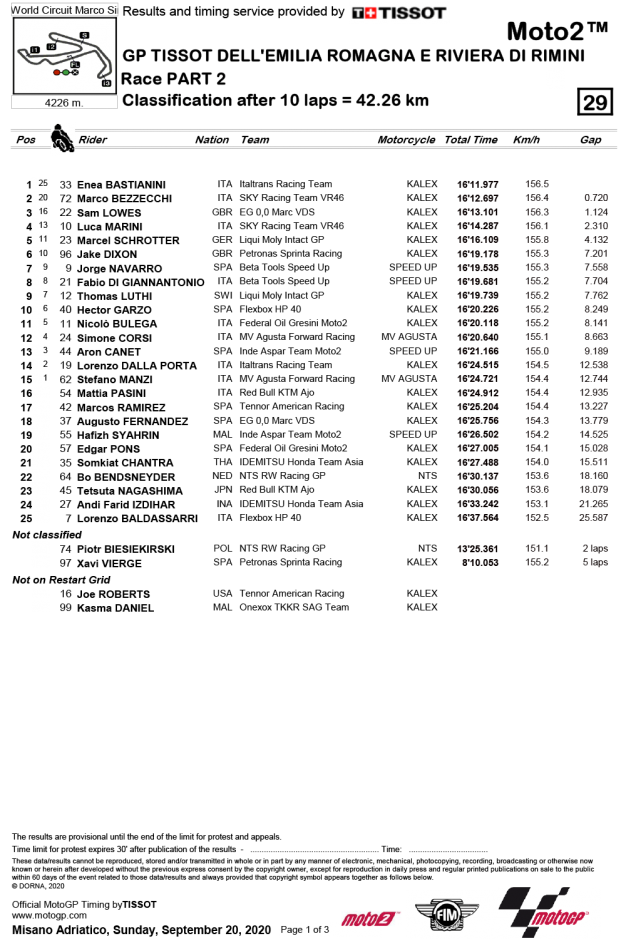 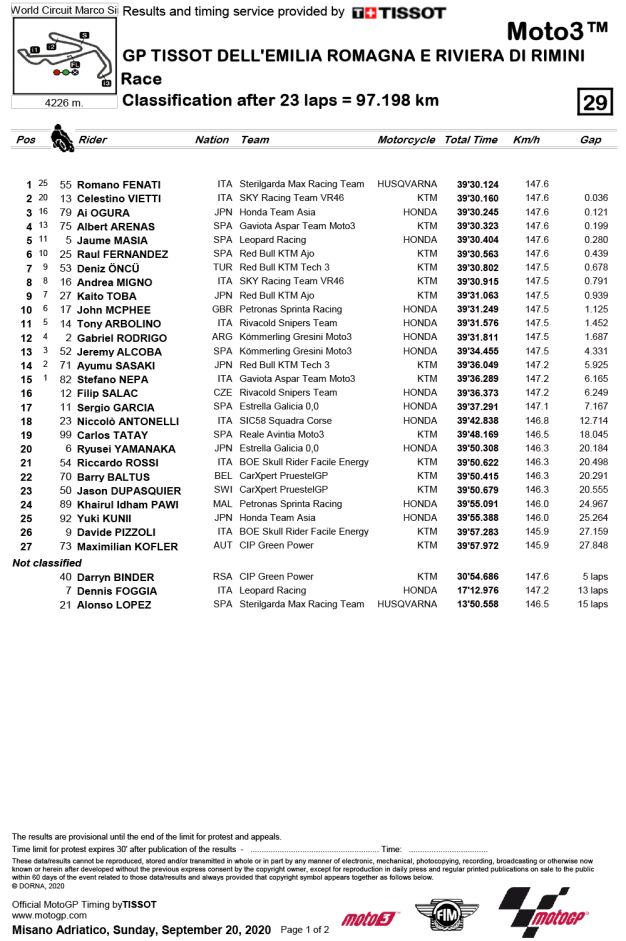 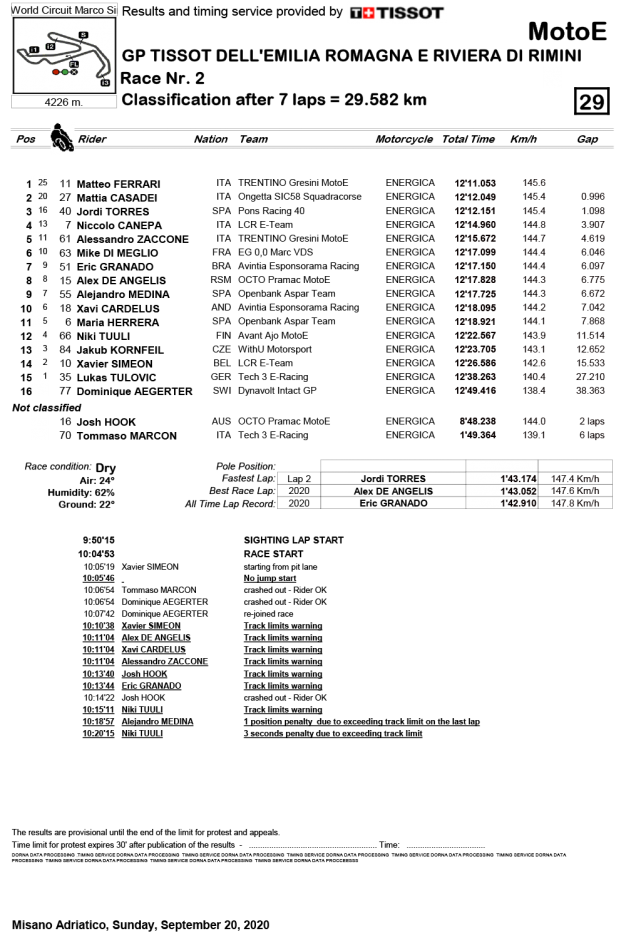