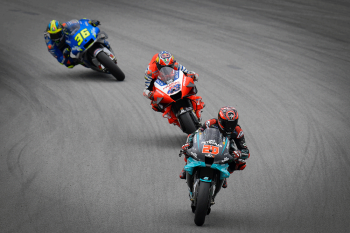 Fabio Quartararo and the Petronas Yamaha SRT team have triumphed in Barcelona at the Gran Premio de Catalunya and surged to the top of the MotoGP championship standings on what was also an excellent day for Team Suzuki Ecstar, with Joan Mir and Alex Rins completing the podium.

There was drama from the outset, however, as championship leader Andrea Dovizioso (Ducati Team) was wiped out in the opening corner after being struck by the fallen Johan Zarco (Esponsorama Racing). Danilo Petrucci had made a strong move and almost went down himself to get past Zarco, touching Pol Espargaro (Red Bull KTM Factory Racing) on the way through. Zarco applied his front brake, causing him to fall. “If I do not touch the brake I think I will anyway touch Danilo, so it could have been the same end,” Zarco commented after the race. The outcome: zero points for Zarco and a raging Dovizioso.

During the drama, Maverick Viñales (Monster Energy Yamaha MotoGP) had dropped back to 15th place while up front, Franco Morbidelli (Petronas Yamaha SRT) was setting the pace with Jack Miller (Pramac Racing) hot on his tail.
Valentino Rossi (Monster Energy Yamaha MotoGP) and Quartararo were left in pursuit, with both getting the better of Miller by the end of the opening lap. By lap eight Quartararo was showing his intention, applying pressure on Morbidelli with Rossi and Miller close behind. Mir was next, waiting for an opportunity. Quartararo assumed the lead from Morbidelli, with the latter having a big moment into turn one with fourteen laps to go, running wide and allowing Rossi through.
Behind them, Miller was struggling to keep Mir at bay but on lap sixteen, just as ‘The Doctor’ looked certain for that elusive 200th podium in his 350th premier class race start, Rossi fell.

Up front Quartararo was now three seconds clear of Morbidelli and then a mistake from Miller let Mir through for the final podium slot. With seven laps to run, Mir wanted more and was only half a second off Morbidelli. The situation only got worse for Miller, as the second Suzuki of Rins loomed behind him. With five laps to go, Rins made his move, putting the Suzuki’s into third and fourth.

With four laps remaining, Quartararo was managing the situation out front with an almost three second gap, but Mir was 0.7s quicker per lap and right on the tail of Moridelli. Hungry for second, Mir made his move on the penultimate lap, cutting past Morbidelli while Rins joined the action, also making his move to put both Suzuki’s on the podium.
This was the first time both Suzuki’s were on the box since Chris Vermeulen and Loris Capirossi at Misano in 2007.

Quartararo held on for an emotional victory, one which sees him take an eight point advantage in the championship from Mir while an ecstatic Rins celebrated a brilliant podium after having qualified in 13th position.
Morbidelli and Miller were fourth and fifth respectively with Pecco Bagnaia (Pramac Racing) in sixth.
Takaaki Nakagami (LCR Honda Indemitsu) was the first Honda home in seventh while Petrucci recovered to eighth. The shock was Maverick Viñales, struggling through the race to ninth and now sitting third in the championship, 28 points behind Quartararo. A gallant Cal Crutchlow (LCR Honda Castrol) rounded out the top ten after suffering ligament damage in his ankle during the week, to go with his already mangled arm. 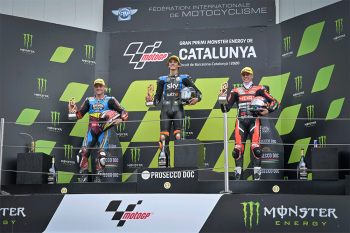 In Moto2 Luca Marini (Sky Racing Team VR46) was able to outlast the challenge from Sam Lowes (EG 0,0 Marc VDS), taking a pivotal victory at the half way point in the season to boost his championship lead to twenty points. Fabio Di Giannantonio (HDR Heidrun Speed Up) took third, scoring his maiden podium for the year.

After an excellent start from Marini, Lowes attacked to take the lead with seven laps remaining. Marini kept the pressure on, wearing down his opponent, pouncing on the penultimate lap at turn one.

Australian Remy Gardner (OneXOX TKKR SAG Team) endure a torrid weekend of penalties to finish a disappointing 16th. Gardner had to take a long lap penalty for exceeding track limits, as well as the six grid spot penalty for the yellow flag crash on Friday. After the race Gardner explained tyres were also an issue, saying, “It was like riding on ice and it sucks when you give it one hundred percent all weekend and a tyre company lets you down when it matters. It was something out of our control and we have to just focus on the next one. I think we could have been in the top ten, the only consolation is that we leave the weekend with no further injury. I am sore but we dug deep, and I will rest now to be in even better shape for France.” 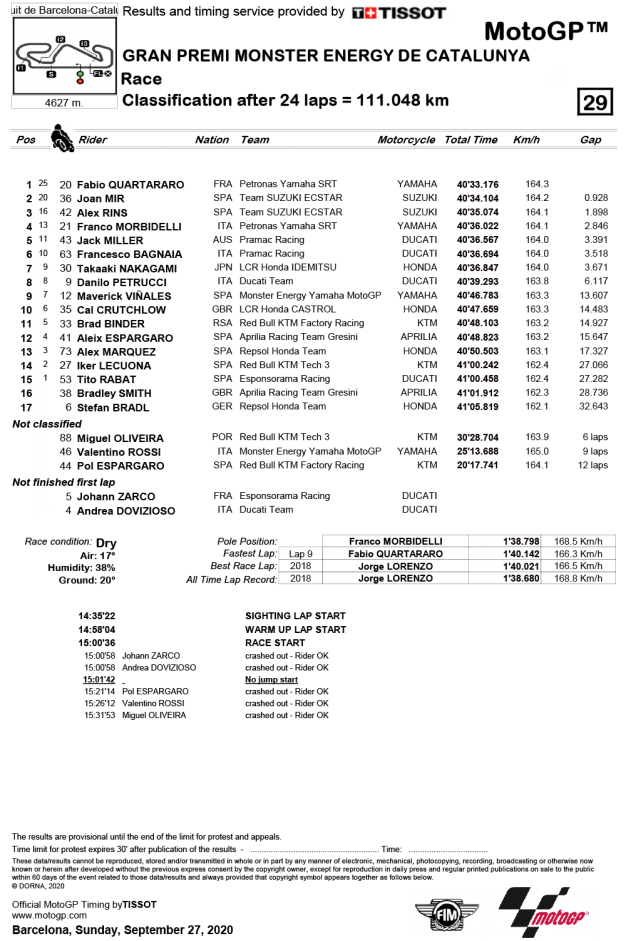 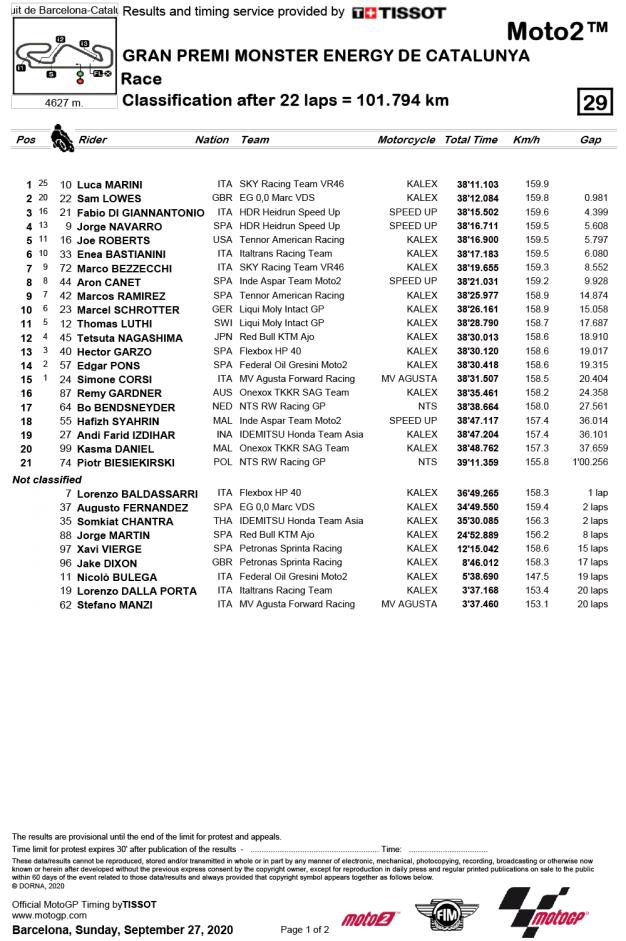 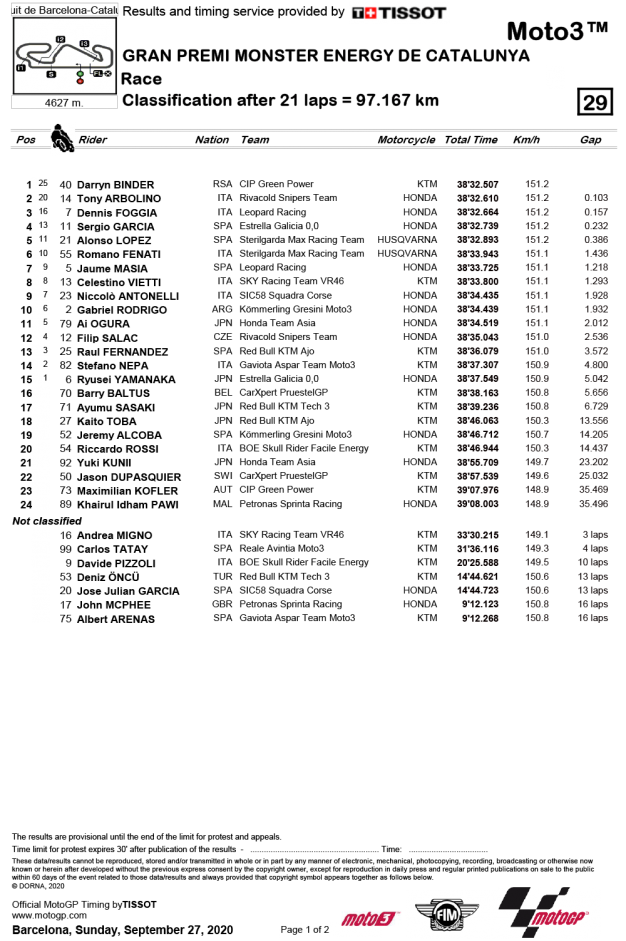