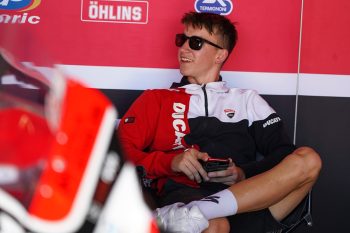 Preparing for the 2022 World Supersport Championship with the Barni Racing Team, Oli Bayliss has expressed he ‘is a lot more comfortable’ on the Ducati Panigale V2 compared to previous Supersport machinery.

Bayliss had an impressive debut season in the Australian Superbike Championship with DesmoSport Ducati, notably winning race three at Hidden Valley before finishing the championship in the fifth position.

The 18-year-old now moves back to Supersport machinery in what will be his rookie season in the world championship, with new ruling for 2022 enabling the Ducati Panigale V2 to be eligible to compete in the World Supersport Championship.

“I really love the bike,” Bayliss told CycleOnline. “We’ve done I think two days on it now and, so far, definitely loving it and it’s been such a great bike for me to take on my overseas journey.

“I’ve ridden a World Supersport-spec R6 and from that compared to this thing, when I am on the V2 I feel a lot more comfortable…

“In all honesty I’m going to go over there, do my best and I’m really looking forward to doing that. It should be good and I’m sure we’ve got a very competitive package.”

The World Supersport Championship kicks off at Aragon, Spain on 8-10 April. Bayliss is set to head to Portugal in early February to continue pre-season preparations in Europe.