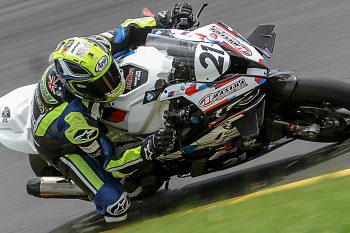 Three-time championship winner Josh Waters has confirmed that he is still trying to secure funding to enable him to compete with the NextGen Motorsports team in the 2022 Australian Superbike Championship (ASBK).

Waters, 34, experienced a challenging 2021, his season ultimately brought to a premature end when the Kawasaki BCperformance team confirmed it would not compete in the season finale at The Bend.

The announcement effectively left the Victorian in search of a seat moving forward and the BMW-equipped NextGen team offered a lifeline of sorts with the opportunity to test alongside fellow triple ASBK champion Glenn Allerton.

Waters’ most recent outing on the M 1000 RR was at the third round of the St. George Motorcycle Club Summer Night Series in Sydney, where he qualified on pole and finished the round second overall courtesy of a 2-3-2 scorecard behind Yamaha’s Cru Halliday.

It’s understood that Waters could join Allerton on the team full-time this season, sponsorship permitting, and at this point the chance of doing so isn’t being ruled out.

“It’s a difficult time of year, with a lot of trades and business people still on holidays,” Waters told CycleOnline. “With our season starting so early and finishing so late, it’s not super-easy, but we are still trying. There’s a lot of positive stuff… but you don’t know until you have got it.

“The BMW’s quite good, I got to race it again on the weekend and, yeah, I didn’t win any races, but got a second and third, was at the same lap-time as Cru [Halliday] and Troy [Herfoss], regular front-runners and that is where I want to be.

“It was good to be back up there. Last year was extremely difficult with a lot of problems and it brings you down a lot, so great to be back and look forward to hopefully getting to ride it at Phillip Island – a track that I really enjoy.”

The 2022 Australian Superbike Championship kicks off at Phillip Island, VIC, on 25-27 February, which marks round one of a scheduled eight-round championship.