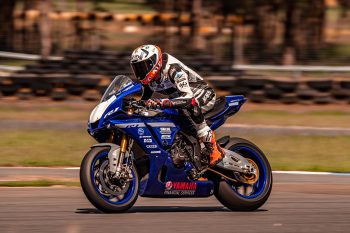 Returning to the Yamaha Racing Team for the 2022 Australian Superbike Championship (ASBK), Mike Jones has been bolstered by the move in a bid to claim his third ASBK crown.

Jones, 27, experienced an up and down 2021 ASBK championship, scoring four podiums in the opening four outings before injury forced him out of the Darwin races, later being unable to contest The Bend.

This year marks a Yamaha homecoming for the two-time ASBK champion, previously riding for the factory team on Supersport machinery and now excited at the prospect of riding a YZF-R1M for the team in the premier class moving forward.

“Yamaha enjoyed plenty of success around the world in 2021 and the R1 has proven to be a very competitive package in every major championship contested this year,” Jones explained.

“Having the team based here in Brisbane and the experience of John [Redding] and Kevin [Marshall] around will be to my advantage and I know from our meetings just how enthusiastic and determined they are this year to get YRT back on top. I’m pumped to be on-board with them.”

Jones spent the last three seasons with the DesmoSport Ducati team, mounted on both 1299 Panigale then the V4R, with the new year bringing a fresh dynamic as he adapts to the Yamaha.

“There’s always changes, as a rider the way you ride the bike is going to change because the bikes are different,” Jones added when contacted by CycleOnline.

“Coming from a Ducati, the way the power delivery is different on that type of bike compared to Yamaha, that’s different, so you adjust your riding style to suit it.

“The thing that is most obvious is the ergonomics of the bike, the position where your handlebars, footpegs and stuff are and getting comfortable on the bike, that’s also different.

“At the end of the day, you can make it as complicated or as simple as you want, but it’s still got two bars and an engine, you just have to adapt and gel with the bike, try to understand its strengths to be able to exploit them and get the most out of the bike.”

Jones has recently had the opportunity to test the Yamaha at Morgan Park and Queensland Raceway, his first official race upon returning to YRT set to be in the 2022 ASBK season opener at Phillip Island from 25-27 February.