Attention turns to first pre-season test of 2022 in February. 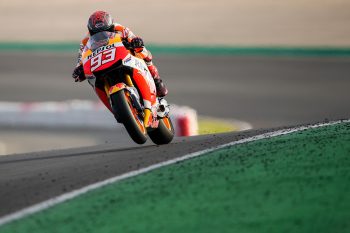 Multiple world champion Marc Marquez’s recovery process has taken a positive step forward, the Spaniard set to return at the Sepang MotoGP pre-season test after a full day of riding the Honda RC213V-S in Portugal.

Marquez used the outing at Portimao to assess the development and improvement of his diplopia – injured again last year in a training accident – and reported no major concerns throughout the day.

“I am feeling very happy, first to be back on a bike at the track and also because we were able to confirm the sensations I had on a motocross bike here with the road bike,” Marquez explained.

“It’s a great feeling, a feeling of relief because when I was riding, I didn’t have any discomfort with my vision. Since I haven’t ridden in so long, I did notice some physical areas where I’m missing a little bit but this is just because I have not been able to have my usual pre-season.

“There’s a margin to improve but the positive and the fundamental take away from this test was to reconfirm the feeling we had when we first got on the motocross bike and to enjoy the good feeling of speed.

“I have completed an intense day of riding with long runs, I am very happy with the results. We have two weeks until testing begins in Sepang so I will take the opportunity to intensify my physical preparation and train on the bike.”

The Repsol Honda rider now has just over two weeks to further regain strength and fitness before the pre-season test in Malaysia on 5-6 February, marking his first time on a MotoGP bike since the Emilia Romagna GP in late October last year.