Free ASBK coverage to be split between live-stream and SBS

Changes to broadcast package have been made ahead of 2022 season. 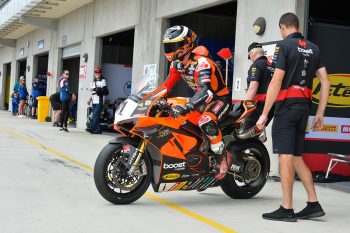 Major changes have been made to this year’s free coverage of the Mi-Bike Australian Superbike Championship (ASBK), due to be split between live-streaming online before switching to SBS during race-day.

It was revealed last week that a portion of the series broadcast package will be moving from Foxtel/Kayo’s Fox Sports to Stan Sport in 2022, that arrangement yet to be made formal by Motorcycling Australia (MA).

However, the series organiser has today confirmed that ASBK will remain live on SBS in addition to SBS On-Demand as the free-to-air broadcast partner, once again to be produced by AVE. Race one of the Superbike category will be shown ‘as live’ before going live for the afternoon schedule.

In another twist, the ASBK TV live-stream service traditionally spanning the entire race-day on the official series website and Facebook will still be active from 10:00am, but will pause when the SBS and yet-to-be-announced Stan Sport coverage begins at 1:00pm.

“Locking in SBS again in 2022 has been a high priority as their history with two-wheel motorsport is legendary,” explained MA CEO Peter Doyle. “I appreciate and welcome their ongoing commitment to top-level Superbike racing in this country.

“For fans, this is a great outcome as it offers them a number of ways to watch the racing – live, on-demand, on their home TV, tablet or mobile phone. With SBS’s support in 2022, alongside our pay TV broadcast partners here in Australia and around the world, we can look forward to a full season of the absolute best the sport has to offer.”

The lack of Stan Sport being made official by MA is part of a staggered announcement strategy, however, it was the platform itself that revealed the ASBK partnership last Thursday as part of a wider motorsport-focused portfolio that includes Australian ProMX and the MXGP World Championship.

It’s been announced that host Kate Peck will join Phil Harlum and Mark Bracks in the coverage, signalling the unexpected departure of Riana Crehan, who is currently a celebrity recruit on Channel 7’s SAS Australia – aired on a rival network of Nine Entertainment, which owns Stan Sport.

Crehan recently announced that she would continue in the ASBK and ProMX hosting role, but wasn’t mentioned in the MA announcement this afternoon and has more recently been linked to a potential return to the Supercars paddock for this season.

The 2022 Mi-Bike Australian Superbike Championship will take-off this weekend at Phillip Island in Victoria, with bikes set to turn their first wheel of the new season on Friday morning at the scenic grand prix venue.