Direct updates from opening round of the ASBK season.

Follow Racefeed for direct updates of the Superbike and Supersport races at the opening round of the 2022 Mi-Bike Australian Superbike Championship at Phillip Island. 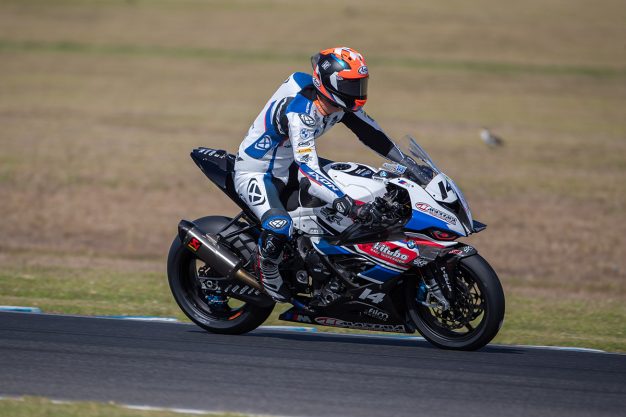 Supersport race one:
Senna Agius (Honda) claimed the opening win of the season, showing speed and class in what was a dramatic first bout. Agius was ninth off the original start and swiftly moved his way up to fourth in the opening stages before Jack Passfield (Yamaha) crashed at turn 10, which brought out the red flag. The eight-lap restart saw Tom Edwards (Yamaha) grab the holeshot again, this time closely followed by Agius at the end of lap one. Agius trailed the number 26 for the opening laps before pouncing into turn 10 to take the lead. Edwards stayed in close pursuit until lap seven when he had a massive rear end slide out of turn 12, the cause quickly revealed as a flat rear tyre which forced him to retire. Agius ultimately won the race with a 9.2s buffer over Tom Bramich (Yamaha) who kept his nose clean to secure P2 and a solid haul of points to start his 2022 campaign, ahead of Jack Hyde (Yamaha) who made his way past Olly Simpson (Yamaha) for third, Simpson crossing the line fourth. Moving his way forwards to fifth was Queenslander John Lytras (Yamaha), as the top 10 were completed by Dallas Skeer (Yamaha), Ty Lynch (Yamaha), Tom Drane (Yamaha), Mitch Kuhne (Yamaha) and Timothy Large (Yamaha), sixth to 10th respectively.

Superbike race one:
Former champion Bryan Staring opened his stint with DesmoSport Ducati in the best possible way as he claimed victory in race one. Staring launched from fifth to second on the opening lap, slotting in behind pole-setter Wayne Maxwell (Boost Mobile Ducati). Disaster struck, however, on lap five for Maxwell, crashing at the Hayshed and unable to remount – Staring notably just over a second from the 2021 champion at the time of the fall. From there Staring rode a controlled race to win by 5.4s ahead Cru Halliday (Yamaha Racing Team) who made a poor start and was left with a lot of riders to pass in his recovery, new teammate Mike Jones on lap eight for the runner-up position. Jones kept the pressure on Halliday right to the line, finishing just 0.116s from his teammate. Josh Waters (Maxima BMW) rode to a relatively quiet fourth place, as Daniel Falzon (JD Racing Yamaha) finished fifth – far from full fitness as he builds from his season finale fall last year. Maxima BMW’s Glenn Allerton and Aiden Wagner (Addicted to Track Yamaha) were engaged in a battle for a majority of the race, the pair sixth and seventh respectively, as Sissis made a great start, before crossing the line in eighth. Matt Walters (Kawasaki Connection) and Anthony West (Yamaha) completed the top 10. Maxwell was effectively cleared of any major injury, expected to line-up again for race two this afternoon.

Supersport race two:
Agius made it two from two in this afternoon’s supersport race, a dominant performance from the Honda rider saw him cross the line 4.8s ahead of Edwards. Edwards was closely following Agius until seven laps to go when he experienced a rear-end slide on the exit of turn six, very similar to that which caused him to crash on Friday. Edwards dropped back two and a half seconds from Agius immediately afterwards, and within striking distance of  Bramich who ultimately finished third. Simpson was able to stay close to Bramich during the opening laps before finishing a comfortable fourth ahead of Lynch. The remainder of the top 10 was completed by Drane, Kuhne, Brendan Wilson (Yamaha), Rhys Belling (Yamaha) and Luke Sanders (Yamaha). Agius’ double victory saw him comfortably take the overall ahead of Bramich, with Simpson completing the top three for round one.

Superbike race two:
Maxwell bounced back in race two to take the victory and deliver on the dominant form he has shown throughout the weekend. Staring made another strong start to leap to second, keeping Maxwell honest at the beginning of the race until losing touch during the second half, eventually finishing runner-up 2.4s seconds back. Halliday made a better start, however was left with work to pass Jones for third. Halliday then kept the pressure on Staring in second for much of the remainder of the race before crossing the line third at the completion of the 12 laps. Jones remained in tact with Staring and Halliday until about the halfway point, from there riding to a somewhat lonely fourth position 1.5s second behind Halliday and 6.3s ahead of Waters who made it two top-fives to start his BMW campaign. Falzon was sixth, ahead of Allerton, Sissis, Walters and 727 Moto Team Yamaha’s Jed Metcher who completed the top 10. Staring was victorious for the round – a dream start with DesmoSport Ducati – holding a seven-point advantage on Halliday, as Jones completed the top three a further three points adrift.