It was Bryan Staring who emerged with the victory at the Mi-Bike Australian Superbike Championship opener at Phillip Island, delivering for DesmoSport Ducati in his first outing with the team. CycleOnline caught up with the Western Australian after the races for this Debrief interview. 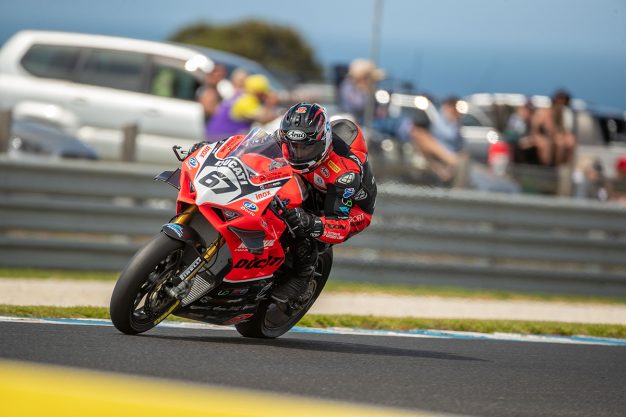 Firstly congratulations on getting the round win. It must be a pretty good feeling to make a dream start with the DesmoSport Ducati team?

Absolutely, that was the dream start, never expected that it might go that well, but I never doubted it actually because the motorcycle is incredible and the level of the team is that high that you know, there’s no reason why we couldn’t have achieved this result. The truth is, we weren’t as fast as Wayne [Maxwell], but that didn’t matter for the overall today. Given that this is the first race meeting of the year, we’ve learnt so much for when we were are expecting to come back here in October, we can start from a much better place. Overall, I couldn’t be happier and can’t thank the team enough for giving me an opportunity to enjoy this weekend so much.

Qualifying fifth then moving your way forwards in each race, it looked like you had pretty good race pace. Is there anything you can attribute that to?


There was only two times this weekend where we made an error of judgement with the set up of the motorbike or our choice, one of them was in qualifying. We didn’t get the result that we were capable of in qualifying, which is why we started from fifth, then the second time was race two where we probably made the wrong adjustment to the motorbike. Overall we are talking about two sessions of the whole weekend, otherwise, we improved every single time. I had a feeling our race pace was quite good and the only question was how good Wayne’s race pace was, and it was strong, but he didn’t race in the 31s like we thought he might have. He still set the benchmark for the weekend, but we have a much better idea of where we stand now.

Seeing you up at the Queensland Raceway at the unofficial test,  you looked pretty happy at the end of the second day there. Moving forwards to round two, do you feel like you found something good at that test that will allow you to hit the ground running when racing resumes up there?

100 percent. Really, the Queensland test was when I first started to take some confidence from the bike and I hope that we can just keep progressing from there and chip away at it. For the short-term, want to forget about the fact that we are leading the series and just think about the long term strategy of how we can keep moving forward. I had a long-term plan to settle into my time and adjust to the motorbike, and it has worked out as a short-term win. I don’t think we need to adjust the strategy at the moment, just keep moving forward.

Getting a win on debut is ominous for your competitors, is there more to come with Bryan Staring and Ducati?

I have to hope that the answer is yes, as the team and I learn each other more and we get a better understanding and knowledge base of each circuit and the tyre in different conditions – that should only make us stronger throughout the sessions and give us better experience for the race. Even still, our set-up for race two is something we can put in the memory bank as something to learn from, so the more experience we get, we should only get better.