WorldSSP completes crucial laps at Misano ahead of debut. 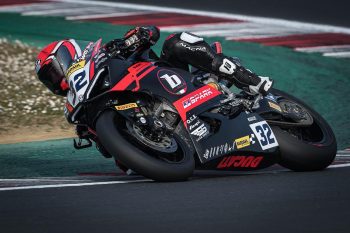 Oli Bayliss returned to testing at Misano in preparation for his debut season in the World Supersport Championship, indicating that his right ankle is still recovering from the injury sustained at Portimao earlier in the year.

Bayliss’ initial test with the Barni Racing team in Europe was prematurely brought to an end when he crashed and fractured his right ankle in Portugal, since there have been approximately six weeks for the Australian to recover.

After completing 143 laps of the Misano Circuit, Bayliss ended sixth in WorldSSP on day two and just over two seconds from pacesetter Can Oncu. The Ducati Panigale V2 rider was positive about the test but remains focussed on his recovery and preparation ahead of Aragon’s opener.

“We had a pretty big crash at Portimao, breaking my ankle in one certain spot,” Bayliss explained. “We thought it was pretty recovered before this test here, but after two days on the bike it is starting to feel a bit sore, I’m happy I’ve got no more riding for about a week now. It’s good, it is giving me time to recover, and by the time of Aragon will be perfect.”

Bayliss will have two more tests – Barcelona and Aragon – before the 2022 World Superbike Championship gets underway on 8-10 April, marking the first of a 12 round series.