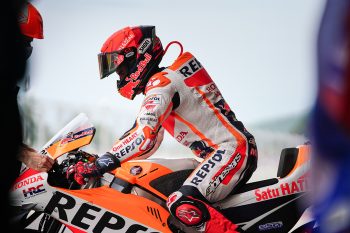 Negative implications from the heavy fall during warm up at the Indonesian Grand Prix see Marc Marquez once again diagnosed with diplopia.

The Repsol Honda rider was declared unfit from the fall and did not contest the 20 lap Mandalika race, suffering a concussion and several minor traumas before experiencing discomfort with his vision travelling back to Spain.

Following an emergency visit to the Hospital Clinic de Barcelona on Monday, Dr Sanchez Dalmau confirmed a relapse in the diplopia that the eight-time world champion suffered last November.

“The neuro-ophthalmological evaluation carried out on Marc Marquez on Monday after the head injury that occurred at the Indonesian Grand Prix, shows a new episode of diplopia caused by a recurrence of paralysis of the fourth right nerve, with less involvement than the one that occurred in the injury in November 2021,” Dr Dalmau explained.

“After this examination, it was initially decided to follow a conservative treatment with periodic medical tests. Next week, Marc Marquez will undergo a new check-up to evaluate the evolution of the injury and to predict the estimated recovery period to return to competition.”

It has been confirmed that Marquez has suffered no further injuries from the fall, but it remains unclear when he will return to competition.