ASBK 600 contender to miss Wakefield as a result. 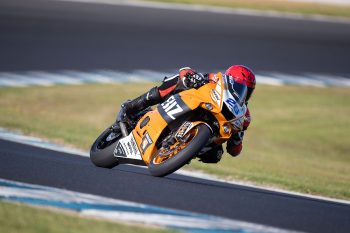 Australian Supersport talent Tom Edwards has confirmed his return to the international stage, set to compete with the Yamaha Austria Racing Team (YART) at Assen’s round two of the World Supersport Championship.

Edwards, 20, previously competed in the WorldSSP 300 championship throughout 2017-2020, showing flashes of potential amidst the highly-competitive field.

2021 saw Edwards focus solely on the Australian Supersport Championship, narrowly missing the title in what was a nail-biting season finale at The Bend against Broc Pearson.

Edwards teased earlier in the year that he had been testing overseas at Almeria, Spain, now confirming his plans to wildcard on the world stage in The Netherlands.

“Snuck off to Spain earlier in the year to test with YART and we’ve been lucky enough to score a wild card in Assen,” Edwards shared.

“I had a blast on the R6 in Almería and did some fast lap times. The team was super welcoming and I’m looking forward to riding with them in this round.

“Busy few weeks of preparation ahead but I can’t wait to have another race in Europe. Big thanks to YART, all my sponsors and my family for making this happen. Let’s race.”

The announcement effectively rules Edwards out of competing onboard the Bikebiz R6 at round three of the Mi-Bike Australian Superbike Championship, as both Assen and Wakefield rounds take place on 22-24 April.