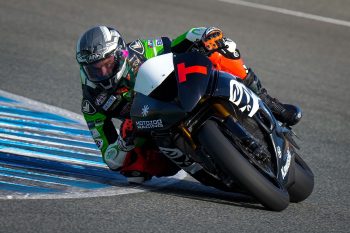 Still recovering from complications of a spinal surgery in the build-up to the 2022 WorldSSP Championship, Motozoo Racing Team’s Ben Currie has confirmed that he will not compete at Aragon this weekend.

Currie made the switch to WorldSSP this season after spending multiple years in the British Superbike Championship (BSB), achieving numerous race wins in the BSB Supersport Championship.

Unfortunately, Currie fractured his L1 vertebrae in a pre-season motocross crash, which required surgery that ultimately led to further issues, including suffering severe anaemia and low oxygen levels in his blood.

The determined Australian did everything in his power to be ready for round one, however, provided an update that he would not be on the grid for the season-opener.

“Everything is going spot on, getting fitter and fitter day by day and I’m in the gym now with my trainer, working on everything we can really to get back fit,” Currie shared.

“Unfortunately won’t be racing this weekend for round one, won’t be declared fit by the Dorna staff, but I will keep everyone updated on when my return will be. I’m unsure yet exactly when it will be, but it will be very soon.”

Following Aragon, the next round of the 2022 WorldSSP Championship takes place on 22-24 April at Assen, giving Currie another two and half weeks to attempt to recover and be ready for round two.