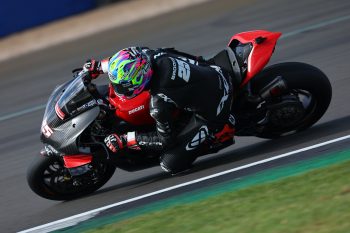 The Australian ultimately completed the two-day test on the National circuit in P14, just 0.656s from pace-setter Tommy Bridewell and one and a half tenths clear of new teammate Tom Sykes.

“It was a fairly productive test despite the weather being difficult with rain and gusty winds at times,” Brookes explained. “But it’s been the same for everyone and from our side, we’ve done a lot of work with various settings and combinations.

“Silverstone has always been tricky for our bike, but last year, Silverstone was a good round for us. We’ve struggled in the last sector of the track in the past so that’s an area we’ve concentrated on this week and now the bike is working as good as it ever has.

“So everything is positive going into the race weekend over Easter, it’s just a case of seeing what the weather will do but I’m ready to rock.”

For the most part Brookes – a two-time BSB champion – has experienced a relatively solid pre-season, leaving Snetterton in March with a clear direction and fourth fastest, with Donington’s test on 31 March cancelled due to weather.

Despite finishing the final test in Silverstone outside the top 10,  Brookes’ comments suggest he is entering round one at the venue on 15-17 April, in a positive way.