Top 10 further sign of progression for Kelso in Moto3

Difficult qualifying costly in Portimao charge towards the front. 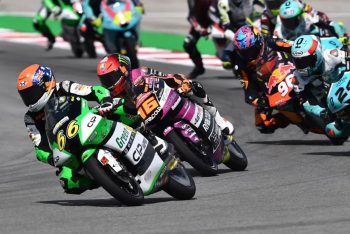 CIP Green Power’s Joel Kelso scored the second top 10 finish of his rookie Moto3 World Championship campaign in Portugal, storming his way through the field from 22nd on the grid to finish ninth.

A wet qualifying during round five of the 2022 world championship provided its challenges, but the Australian moved his way forwards in the race, displaying great pace and later admitting that a higher grid position would have provided a better opportunity to run with the lead group.

“Honestly, it’s been a difficult weekend for us with very tricky conditions,” Kelso explained. “Honestly, I’m very happy with the end result to finish P9. It’s good to finish in the top ten.

“We were strong today in the race. Unfortunately, we missed the front group, but this was just due to the position where we started. But overall, I’m super happy. I’m ready to start again next weekend in Jerez.”

Kelso’s first top 10 of the season came at Termas de Rio Hondo earlier in the season, after qualifying an impressive P5. The KTM rider has shown on multiple occasions that he has the pace to fight towards the front.

Having gained seven points from Portimao, Kelso now sits P16 in the standings with his next outing coming this weekend at Jerez in round six of the Moto3 World Championship.