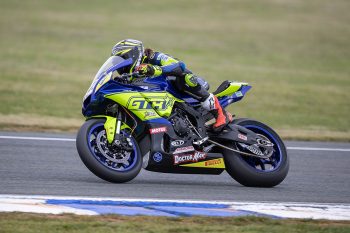 Stauffer statistically was having the strongest Friday of his 2022 ASBK season before a crash at turn three in the third practice session resulted in a trip to the Canberra hospital and forced him out of Saturday’s qualifying.

Starting both of Sunday’s races from the back of the grid, Stauffer soldered on to notch a 14 -13 scorecard and finish 13th overall in what were an important two outings for the number 27.

“Just the fact that I was able to get on the bike after having a crash, instead of being off the bike for a certain amount of time and worrying about getting back on the bike again,” Stauffer explained.

“It was good to be able to get on the bike and have a ride straight after I’ve had a big crash, and I passed a few people in the championship with a few people not finishing.

“The biggest thing was, we got to try a few things that we potentially wouldn’t have tried if I wasn’t starting from the back of the grid. We actually learned quite a lot in the two races, I think it was quite a good thing that we did the two races.”

The 15 points gained from round three elevate Stauffer to P13 in the championship standings, where he is now the leading rookie after Broc Pearson fell in warm-up. Stauffer has over seven weeks to recover before the fourth round of the series takes place at Hidden Valley on 17-19 June.

“I’m still really sore, and stiff, but I’m getting a lot of mobility back in my hip area and I’m walking a lot better now, so that is a lot better, but my lower back is still quite sore and stiff,” Stauffer added. “I’m okay, I’m back at work hobbling around and getting things done. I’m relatively okay, just recovering.”