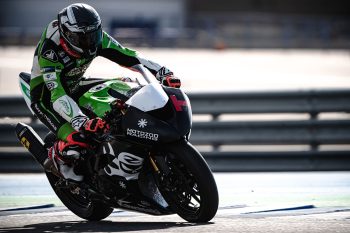 Ben Currie will make his long-awaited WorldSSP debut with the Motozoo Racing Team at Estoril, having been passed fit to return to competition following extensive pre-season injuries.

Currie crashed while training in the build-up to the 2022 season, fracturing his L1 vertebrae and separating his spine before negative effects post-surgery provided further complications.

After missing the first two rounds as he recovered, Currie will commence his first campaign in the world championship next weekend in Portugal, joining fellow Australians Oli Bayliss and Tom Edwards on the WorldSSP grid.

“Today I’ve officially been passed fit to return to racing from round three Estoril, Portugal,” Currie shared. “Next weekend will be my official WorldSBK debut and I can not wait!

“What a journey it’s been with so many people to thank for all the effort & hard work gone in over the last 12 weeks. Although I’m not 100 percent where I want to be, it’s a huge boost I can get back testing tomorrow with the Motozoo Racing Team here in Misano.”