Parkes named as fill-in for second half of ASBK season. 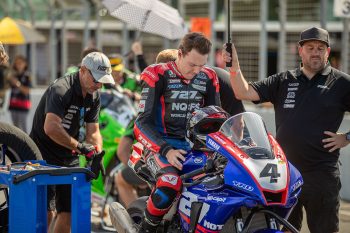 727 Moto and Broc Pearson have parted ways for the remainder of the 2022 Mi-Bike Australian Superbike Championship (ASBK), with team owner Travis Schmitz indicating that the termination will prohibit the Queensland rider from racing in the premier class altogether for the rest of the year.

Pearson – the current Australian Supersport champion – graduated to the Superbike category with the private Yamaha squad for 2022 and, by his own account, had high expectations for his first season in the category.

After showing promising pace while testing Superbike machinery in the back-end of last year, it’s been a challenging start to the season for Pearson, despite qualifying P8 on debut at Phillip Island. Most recently at Wakefield Park’s third round he was ruled out of Sunday’s two races following a warm-up crash.

“Broc probably came to us four weeks ago, after Wakefield, and said that he didn’t want to ride the bike anymore,” Schmitz explained. “I sort of said, ‘mate, I think you are crazy, we are going to make a lot of changes to the bike, obviously a lot of stuff is going on, just ride it once and just see how you feel’.

The revelation comes after Pearson’s former proven championship-winning crew chief Paul Free was released of his duties with the 727 Moto Team. Free was the team manager before the outfit restructured and shifted its focus towards the end of the year, which included the decision to sit out the upcoming ASBK round at Hidden Valley, NT.

If Pearson is indeed unable to compete in the premier class within ASBK, a return to Supersport would be the only logical option if he were to continue racing this season at an Australian national level. He was unavailable for comment at time of publishing.

Following a recent test with the team, Schmitz has confirmed that experienced longtime international Broc Parkes – himself due to ride with Yamaha Racing Team last year before announcing his retirement with immediate effect – will replace Pearson on the YZF-R1 at remaining rounds the team competes in. He was already slated to contest a series of one-off events.

“Jed [Metcher] is working away in Tasmania, so Parkesy has been doing a lot of testing for us,” added Schmitz. “He was going to do a lot of wildcards at the end of year — we have got five bikes, so he was always going to do MotoGP and maybe World Superbikes in the support class at Phillip Island.”