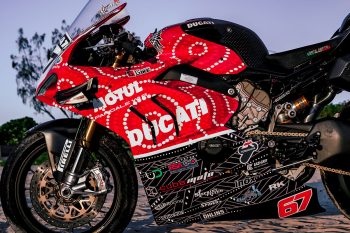 The DesmoSport Ducati Team has uncovered a one-off indigenous-themed livery on Bryan Staring’s V4 R ahead of round four of the 2022 Mi-Bike Australian Superbike Championship (ASBK) to be held at Hidden Valley in the Top End.

Designed by Gold Coast based artist and performer Luther Cora, the artwork brings together elements of the Yugambeh Language region, now known as the Gold Coast and Tweed Heads in Queensland.

“Although I’m back living in Western Australia, I lived on the Gold Coast for quite a while, so I’m proud to be riding a bike in Darwin that tells some of the story of the Yugambeh Language group, the original owners and caretakers of the Gold Coast area,” Staring said.

“Learning about the importance of the waterways, the traditional meeting places and of Mibin, the eagle, has been really interesting, and I hope at the very least, our bike helps more people learn these stories and more. Luther is passionate about his heritage and the way he talks about culture and ancestors is inspiring.”

DesmoSport Ducati co-owner Ben Henry added: “When the opportunity came up to run an indigenous-themed livery on the bike, it wasn’t even a question for Troy [Bayliss] and I, but we really wanted to have something that connected back to the team and represented where we are based.

“We met Luther through the Jellurgal Aboriginal Cultural Centre just down the road from us here in Burleigh Heads, and straight away he had some ideas of how to bring some of the stories of the Yugambeh Language Region to life on the Panigale V4 R.”

The squad join Penrite Honda Racing in running an indigenous-themed livery for the upcoming round at Darwin on 17-19 June. Staring sits third in the ASBK championship following the opening three rounds of the 2022 series.