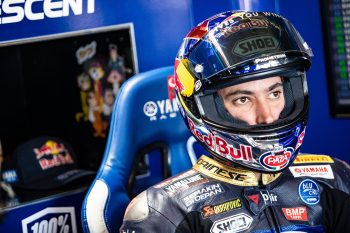 The 25-year-old sampled the M1 with 40 laps of the Spanish circuit, the majority of which being in short runs amidst the hot conditions as he adapted to the GP bike and Michelin tyres. No lap times have been released from the outing.

“This was my first day on the Yamaha M1 MotoGP bike and it felt completely different to my R1,” Razgatlioglu explained. “More horsepower, different electronics, seamless gearbox, all of which is completely new for me.

“With every lap, I learned more, because after the world superbike it’s not so easy to adapt to the MotoGP machine. Fortunately, I had Cal Crutchlow on hand to offer advice and he was able to help me a lot.

“The bike feels good, especially on the straight where it’s very fast, and it was interesting to experience the carbon brakes. The conditions were really hot today, so we stuck to doing five or six-lap runs only after the initial run of 12 laps to get a first feeling for the bike.

“When I watch the MotoGP bikes on television here at Aragon you can see it is a bit bumpy, and I can feel it here today. It’s not so bad, you have to keep the gas open to ride through the bumps, because if you close then it becomes more unstable.

“Overall, a very positive test, even if it was cut short by rain this afternoon, which meant I didn’t get quite as many laps in as I’d have liked. I really enjoyed riding the MotoGP bike, so many thanks to Yamaha for allowing me this opportunity.”

With Yamaha’s confirmed MotoGP presence on the 2023 grid reduced to two bikes after RNF Racing announced their switch to Aprilia, it would seem the chances are slim that Razgatlioglu will get a permanent spot on next year’s MotoGP grid with the Iwata factory.

Razgatlioglu’s manager, Kenan Sofuoglu, has expressed in the past that he wouldn’t consider the move unless it was with a factory team. Both riders in the Monster Energy Yamaha Team are contracted through next year – Fabio Quartararo to the end of 2024 and Franco Morbidelli to the completion of 2023, and there’s no concrete indication yet of a Yamaha-equipped team filling the vacant grid slots created by Suzuki’s intended exit.

The number 54 currently sits third in the 2022 WorldSBK Championship standings following the first four rounds of the series, with his next outing in that paddock taking place at Donington Park on 15-17 July.