Australian recovers to score P6 at The Cathedral of Speed. 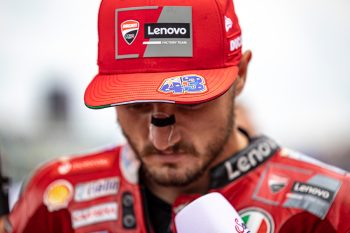 Another long lap penalty during the 2022 Dutch TT at Assen proved costly in Jack Miller’s bid for a podium in the 11th round of the MotoGP World Championship.

Miller qualified P6 and showed strong pace throughout the 26-lap outing, ultimately missing the rostrum by 1.8 seconds as he crossed the line sixth.

The Australian lost roughly 1.7 seconds from having to take the long lap, and a position Takaaki Nakagami. Arguably, if Miller did not have to take the long lap – enforced for impeding Maverick Vinales in qualifying, he would have been right in top three contention come race end.

“The long lap today cost me a lot,” said Miller. “I’ve had a great pace all weekend, and I was able to show it in the race, but when you find yourself so far behind, it isn’t easy to make up positions straight away and ride the way you want to.

“Nevertheless, I didn’t give up and pushed until the end. I tried to attack in the last laps, but I lost the rear allowing the rivals behind to get closer.

“Overall, I think I had a good race, and I’m happy about that, so I’m trying to take the positives from today. Now we head into the summer break, and I’ll try to carry these good feelings into the second part of the championship.”

The long lap penalty for Miller at Assen marks his second in two races, where previously he was handed a long lap penalty in Germany for crashing under a yellow flag in FP4. He recovered to finish third at the Sachsenring.