Suzuki confirm MotoGP and EWC exit at the end of 2022

Decision to leave both series finalised from conclusion of season. 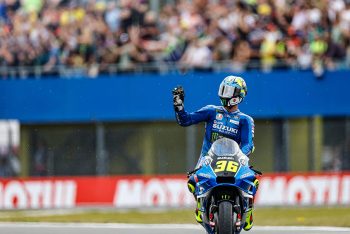 An announcement was released in May regarding Suzuki’s intended exit from MotoGP, with the latest update making their absence in the premier class official from 2023.

Yoshimura Suzuki Endurance Racing Team (SERT) are the reigning EWC champions, with the brand boasting an immensely successful history in endurance racing, scoring multiple world titles to create its legacy as the most successful manufacturer in the modern area of the series.

“Suzuki has decided to end the participation of MotoGP and EWC in the face of the need to re-allocate resources on other initiatives for sustainability,” representative director and president of Suzuki Motor Corporation Toshihiro Suzuki said.

“Motorcycle racing has always been a challenging place for technological innovation, including sustainability, and human resource development.

“This decision means that we will take on the challenge to build the new motorcycle business operation by redirecting the technological capabilities and human resources we have cultivated through the motorcycle racing activities to investigate other routes for a sustainable society.”

“I would like to express my deepest gratitude to all our fans, riders and all stakeholders who joined us and enthusiastically supported us from the development stage since we returned to MotoGP racing.

“I will continue to do my best to support Alex Rins, Joan Mir, Team Suzuki Ecstar and Yoshimura SERT Motul to compete competitively until the end of the season. Thank you for your kind support.”