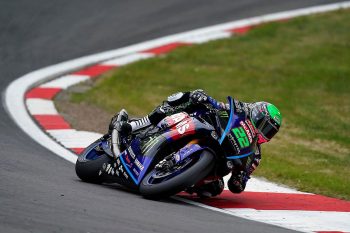 McAMS Yamaha’s Jason O’Halloran has moved into the lead of the 2022 British Superbike Championship (BSB) following a strong weekend at Brands Hatch that included a victory in the Sprint Race.

O’Halloran entered the weekend second in the points to Rich Energy OMG Racing Yamaha’s Bradley Ray, off the back of a double victory at the previous round at Knockhill.

The number 22 jumped to an early lead in the opening bout and emerged on top of the four-way battle for the lead, bettering teammate Tarran Mackenzie, Tommy Bridewell (Oxford Products Racing Ducati) and Ray.

In races two and three O’Halloran finished runner-up on each occasion and made it nine consecutive races where he has not finished lower than second. He was less than a tenth from victory in the third bout at Brands Hatch.

“A really good weekend for us, I was really happy to win yesterday,” O’Halloran said. “I’ve finished no worse than second in nine races now and won five of them. We needed to make a step forward at Brands from last year and I think we’ve done that.

“I’m really happy with the progress here, we made a change for the last race which was a bit of a risk and I fought with Taz [Mackenzie] all the way to the end, made a pass on the last corner and nearly made it stick but just didn’t quite get there!

“It’s been an amazing weekend for the whole team, we won every race, had every pole and were second in every race too. Everyone is doing a fantastic job and I can’t wait for Thruxton.”