Next outing with V4 R to take place tomorrow at Morgan Park. 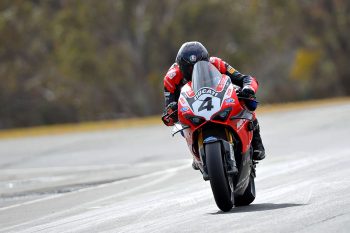 Queensland talent Broc Pearson’s first test with the DesmoSport Ducati team was limited due to poor weather conditions, however, he was able to complete some laps and get an initial understanding of the V4 R.

The current Australian Supersport champion got his first taste of the Italian platform at Morgan Park on Thursday and Friday last week, during an unofficial ASBK test at the Southern Downs circuit.

“The weather conditions were pretty much up against for the two days, but it was quite similar on both days in that it dried up later in the afternoon and it did give me chance to get out on the bike and have a spin,” Pearson explained to CycleOnline.

“Initially, my thoughts were… it’s completely different to what I had been used to all year. The Ducati has a whole lot more power than what I had been dealing with earlier in the year, and it comes on quite strong through the middle of the rev range, all of the way to the top.

“Because of that, you have kind of got to ride in like a 600, which is good in a way because I was used to the 600 so much. With the Ducati having so much more power, you have to right it right up there in the rev range and it was a bit daunting in some areas trying to get used to it in pretty poor conditions.

“Initial thoughts are fast, handles good and it’s got a really good electronics package. Just trying to get my head around it, and with some more seat time on it, I’m sure I’ll work it out.”

Pearson being allowed to test the V4 R begs the question of what opportunities it could lead to, for him, with the Desmosport Ducati team. Previously, he was Yamaha R1 equipped with the 727 Moto Team before parting ways with the squad after round three of the 2022 Mi-Bike Australian Superbike Championship at Wakefield.

For now, no race outing has been confirmed for Pearson on the Ducati, but he will ride the bike again tomorrow at Morgan Park in what is forecast to be much better conditions.

“Back out on the bike tomorrow, that will be good as I will get another day on it,” Pearson added. “It’s kind of what I need, a day to get used to the bike and adapt. What I did in the two days wasn’t too bad of an effort considering the whole learning process and where I ended up, but I could definitely take advantage of another day of testing on the bike.

“In terms of racing it, to be honest, I really don’t know, it hasn’t been discussed. Hopefully tomorrow I can go and put some good laps under my belt, probably try and turn down some fast times, whether that influences the race weekend, I’m not too sure at this point.”