Supersport champion to line up alongside Staring at round five. 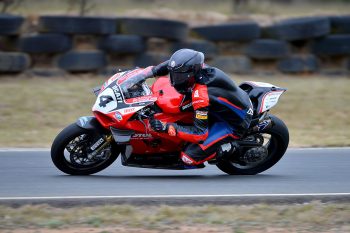 DesmoSport Ducati has confirmed that Broc Pearson will race a V4 R for the outfit at the fifth round of the 2022 Mi-Bike Australian Superbike Championship (ASBK) at Morgan Park.

Pearson completed his first laps onboard the Italian platform during the two-day unofficial ASBK test in Warwick last week.

His laps were limited due to poor weather and he was subsequently provided with another opportunity to test the V4 R yesterday at Morgan Park, in improved conditions. It was by all accounts a positive day for both himself and the team.

“I really enjoyed riding the DesmoSport Ducati Panigale V4 R last week,” Pearson said. “It’s a different bike to ride than the other superbikes I’ve ridden so far, especially where the bike makes its power.

“The weather wasn’t ideal though and I really didn’t get a chance to show the team what I was capable of on the bike, so I wasn’t about to waste the opportunity for some track time with DesmoSport again today.

“My focus was to just get out there and ride, get comfortable on the bike and start finding my limits on the bike rather than worrying about setup. I had a good day, with minimal changes and just plenty of laps.

“I’m excited to return back to the grid and I’m motivated to achieve a great result for myself and the team alongside Bryan [Staring]. I am very appreciative that Ben [Henry], TB [Troy Bayliss] and the DesmoSport Ducati team have given me the opportunity.”

DesmoSport Ducati co-owner Ben Henry added: “After the initial two-day test was reduced due to the weather, there was an opportunity to ride today that worked for us, along with a few other ASBK teams.

“We managed to get Bryan back and gave Broc a call to make good our initial offer and give him a good opportunity on our Panigale V4 R. I’m happy with our progress today in general, and Broc did a really good job, putting in some fast and consistent laps.

“Troy and I have always enjoyed being a team that is not only successful, but one that looks to help riders expand their careers.

“Since we announced Broc would test on the bike, we’ve spoken quite a lot about what it would take to have Broc race and he’s given us some confidence today that he’ll make the most of the opportunity.”

Round five of the 2022 ASBK Championship at Morgan Park takes place on 5-7 August.