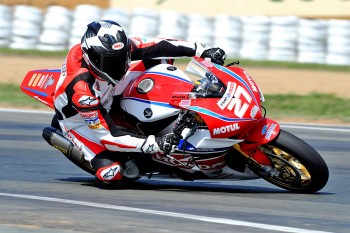 The test, which concluded this afternoon, featured a handful of leading Superbike contenders, as well as a host of racers from within the Supersport and Formula Oz ranks.

Unofficially it was ASC series leader Stauffer who marginally edged out Maxwell both in the 1m06.9s bracket, the pair reportedly equalling Robbie Bugden’s best lap from the Yamaha test at the circuit last month.

Motul-backed Maxwell’s form was particularly impressive riding with a fractured leg sustained in an Endurance World Championship crash less than a fortnight ago.

The test also marked the return of Josh Hook to the Team Honda Racing fold after he was seriously injured at the Phillip Island Championship opener two months prior, setting the third quickest time half a second off the pace of Stauffer and Maxwell.

Another three tenths back from the Honda trio was racing returnee Troy Herfoss, the former Australian Supersport Champion aboard a fourth official Honda CBR1000RR SP at the Mallala test. It’s anticipated he will remain aboard it for the season remainder.

Kawasaki’s current number one plate holder Matt Walters posted a 1m08.0 and Ben Henry a 1m08.8; both stating they lapped on old tyres during their fastest laps. Other top ZX-10R-mounted privateer Dustin Goldsmith’s times were unavailable.

It’s understood Bugden’s teammates Rick Olson and Cru Halliday both lapped in the low 1m07 range during the separate Yamaha test at the venue.

Just three Supersport regulars fronted for the test – South Australian local Daniel Falzon alongside Queenslanders Aiden Wagner and Callum Spriggs. Falzon’s best after completing just one day of the test was a 1m09.2, while Wagner did a 1m09.4 and title leader Spriggs a 1m09.5.

Round two of the Swann Insurance Australasian Superbike Championship will take place at Mallala next weekend, 16-18 May.