Team Honda Racing rider back on the bike following injuries. 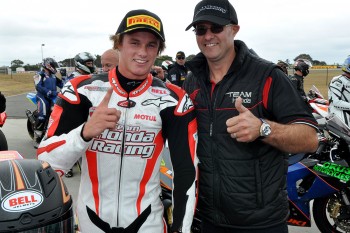 Hook scored his first national Superbike race win at the opening round of the Phillip Island Championship in February, but a race two crash saw him suffer a fractured vertebrae alongside a broken wrist and collarbone.

The injuries forced Hook out of Wakefield Park’s opening Australasian Superbike round of the season, however he’s now on schedule to return in South Australia for round two next weekend. And upon return, don’t expect the 21-year-old to waste any time getting back up to speed.

“In February I felt like I was the pace-setter there at Phillip Island, which is a good track for me,” Hook told CycleOnline. “I wasn’t sure how I was going to go on these smaller tracks anyway, but we’re not too far off.

“We’ll be in the battle for the win, that’s for sure. I’m pretty confident of that. I’m just looking forward to it – it’s going to be tough.”

Hook was third fastest at Mallala’s Team Honda Racing test on Tuesday and Wednesday this week, an encouraging sign after almost three months out of the saddle.

“It was my first time on the bike for a couple of months, so I was pretty rusty to begin with,” Hook explained. “The first day I was just sort of finding my feet again and we went reasonably well.

“On the second day I felt a lot better and as for pain and stuff, when I’m riding the bike it’s all good, but when I get off it it’s fairly painful. It was just a matter of getting into a rhythm and we didn’t end up too far off the pace.

“We need to find a few tenths or so for Jamie [Stauffer] and Wayne [Maxwell’s] pace, but at this stage I’m not too worried and I think we will be running at the front, for sure. I’m pretty confident.”

With replacement rider Troy Herfoss today drafted into THR fulltime for the rest of 2014, Hook insists that adds no extra pressure to his campaign aboard the CBR1000RR SP.

“After missing the first round I’m just focused on getting good points and finishing races consistently at the pointy end of the field,” he added. “It’s no different to having Jamie or Wayne on the team – they’re all well-competitive racers. I’m just going to focus on myself, so it doesn’t affect me much.”