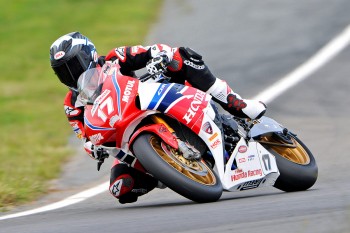 Team Honda Racing has announced that Troy Herfoss will be integrated into the factory team for the remainder of the 2014 Swann Insurance Australasian Superbike Championship (ASC).

Herfoss filled in for Josh Hook at Wakefield Park’s opening round, exceeding expectations in his return to racing, and will now line up alongside Jamie Stauffer, Hook and Team Motul Honda’s Wayne Maxwell on a fourth official CBR1000RR SP.

The 27-year-old was initially slated to ride his own privateer Honda in the Swann Series with limited support from Team Honda Racing, following a full season on the sidelines last year.

“I am really pleased to have the chance to continue competing with Team Honda Racing,” Herfoss commented. “Round one at Wakefield Park went really well and I enjoyed working with the team. Now to compete for the whole season knowing that I go to every race event with the most competitive bike and the most proven team in Australian road racing is just fantastic.

“The two-day test went well, although personally I was a little cautious as I don’t know the circuit well and it was the first time for my mechanic, Jason [Kain] and I to work together on our own.

“I have a lot left in me and we gained so much from the test. I believe we have what we need to be competitive at the front again at round two in a couple of weeks.”

“To sign Troy for the season seemed to be the natural progression of things after round one at Wakefield Park,” Free said. “We are really pleased to have him onboard and it will be fantastic to see such a strong presence for Team Honda Racing and indeed the Honda brand out on track all year.

“All four riders will do Honda proud and I am really excited about the racing ahead. The test at Mallala was very valuable for us. We haven’t raced there for a number of years and it is a very technical circuit so it was good to take the CBR1000RR SP through its paces.”

Click here for a detailed report on this week’s Mallala test hosted by Team Honda Racing.

Herfoss will make his official debut as a THR regular at Mallala in South Australia next weekend, 16-18 May.