What we now know about the limited edition MotoGP street bike. 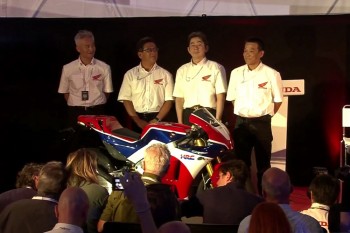 Honda has officially launched its RC213V-S during a press introduction on the eve of this weekend’s Catalunya round of the MotoGP World Championship in Barcelona.

Three years in the making, Honda has detailed the release of its road-going MotoGP entry, which will be available in limited numbers to allow customers to get “the ultimate MotoGP experience”.

Developed by project leader Yosuke Hasegawa to be rideable on the street, the RC213V-S is designed to replicate the feel of factory Honda MotoGP race bikes. And, according to Repsol Honda’s reigning world champion Marc Marquez, Honda has succeeded!

Packed with lightweight componentry, a smooth, powerful 1000cc 90-degree V4 motor and true grand prix electronics, it will be on sale in Australia at $244,000 (in Europe for 188,000 Euro and in the US for $US184,000) and will also have an optional sports kit available for track usage.

Described as the “world’s easiest machine to manouvre” by Honda Racing Corporation president Tetsuo Suzuki, his only request to engineers was “to develop a real MotoGP machine that people can ride on public roads”.

According to Suzuki, it is almost the exact same machine as the RC213V ridden by Marc Marquez to the 2013 and 2014 MotoGP World Championships. Only one unit per day will be produced to ensure quality and the production period ends at the end of 2016.

Hasegawa confirmed that the changes made to the S model in comparison to the factory race bikes include moving from pneumatic valves to coil spring systems, the seamless transmission has been swapped for a traditional one – both the same spec as the RC213V-RS currently ridden by Australian rookie Jack Miller in the ‘Open’ ranks.

The muffler has also been revised for street use, plus the usual addition of lights, etc, have been added while retaining the fundamental configuration of a real MotoGP machine.

Practical qualities revised for public riding include the fitment of Bridgestone RS10 street tyres and removal of carbon brakes, as well as an increased maximum steering angle, included starter motor, smart key and a sidestand has been added.

In terms of basic electronic systems, it was confirmed that a power selector, selectable torque control and selectable engine brake system will be included. Five types of riding modes are available to suit a wide range of situations, plus a quickshifter will also come as standard equipment. 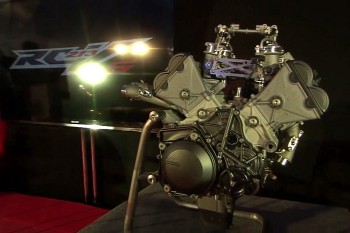 Maintenance is required to be carried out by official workshops with specially-trained technicians and tools.

Ordering will be available in each region via www.rc213v-s.com, enabling potential customers to register their interest in the RC213V-S from July 2015.

Honda is hoping to host a launch for international media to sample the RC213V-S in the “near future”. It’s also anticipated that the technology within the MotoGP street bike will be directed to mass-produced products as well.

Further official information and specifications will be posted once released in detail by Honda.