KTM’s 1090 Adventure R is the headstrong, slightly more athletic, slightly more agro off-road sibling to the 1290 Super Adventure R tested here, so as I sailed off a small erosion bank on this monster, I wasn’t anticipating anything less than a controlled landing.

This is, after all, a bike that’s lighter and less powerful than the 1290 R, but only because less is often more in an Adventure bike and KTM’s thoughts are that the more hardcore riders will opt for this go-anywhere performance over the comfort the Super Adventure offers.

So while technically the 1090R ‘only’ has a claimed 125hp compared to the big girl’s 160hp, it is pushing less weight (207kg versus 217) and is a hornier spec overall, making for faster galloping over the rough stuff. 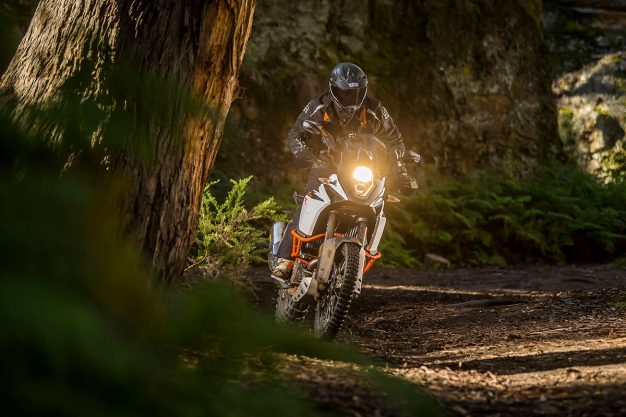 The heart of the matter is the new 1050cc, 75-degree V-twin, an engine that loves a rev, yet still boasts 15,000km service intervals! If all those 15k kilometres were off-road, you’d be pitting with your local KTM dealer a lot sooner and air filters, etc, still need a regular clean. A service interval like that is still a big vote of confidence in its product from KTM, though.

The engine is willing, but it doesn’t have as much bottom-end as the Boxer engine BMW offers, meaning picking the beast up and over an obstacle at low speed takes some clutch and forethought. Exploding pieces of exhausted fire trail out its arse-end, however, is no problem whatsoever. If you need more power than what this offers, Chris Birch and team KTM want to meet you!

Our test loop on the Aussie Adventure range launch included an enjoyable 4WD section, laden with potholes hiding in shadows, sudden, unannounced sand sections and the odd mud patch left over from a month of rain up that way in the NSW Blue Mountains. 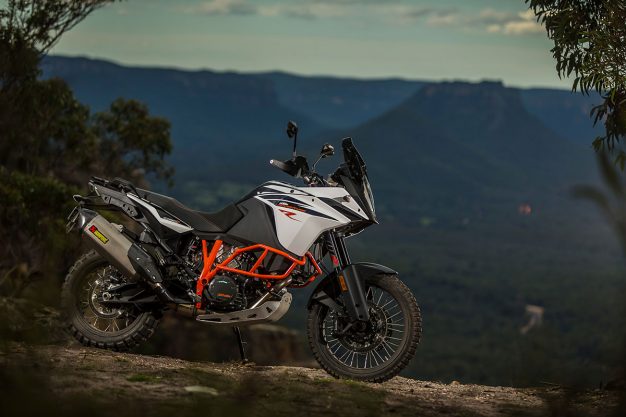 I always ride an Adventure bike with something in reserve in these conditions, thanks to the fact they can get up to speed frighteningly quickly, but hauling them back down again for something that surprises you around a blind corner can be very difficult due mass and the laws of physics. On this bike, I felt the same, but it is less likely to remain immovable when you need to shift direction at bugger-all notice, and as long as the engine is humming along in the mid-range, getting the front wheel out of trouble is just a lean back and snap of throttle away.

It’s an exciting ride, one that entices hyperactive throttle action just because the bike is so responsive and that Ready to Race DNA just makes the bike feel better when it’s moving around underneath you, the engine is spinning higher up the rev range and you are officially ‘rider active’. It’s an absolute hoot.

The bike gets up and boogies, so like on the new 1290, it’s nice to have quality electronics backing you up. In Off-road mode, the Traction Control, a soft-action asset that retards wheel-spin via the throttle valves, allows spectacular and long power drifts out of appropriate corners, yet trims the fun when the bike recognises it’s about to become ‘un-fun’ any time soon. It doesn’t mean it’s uncrashable, it does mean you can leave the TC on in the dirt and not be swearing at the computer for spoiling the fun.

With the traction off altogether, a time-consuming process compared to the BMW and one that must be done at standstill, the bike doesn’t become an unrideable hurricane of V-twin fury, however. It is smooth and predictable on the surfaces we crossed, just bear in mind 125hp on dirt is mucho horsepower! 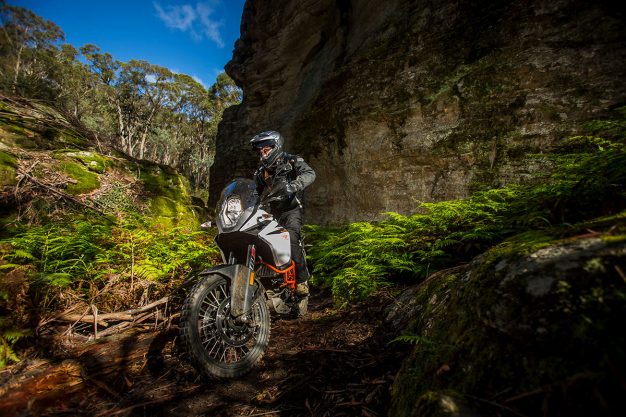 The frame looks massive from alongside the bike and when looking down on it from the seat, but that mass fades away as you start moving. The weight is low-ish, though it’s a decent leap up to the 890mm saddle and the bike’s girth seems at odds with its enduro-like riding position.

I love the seat comfort and just standing up seems to make the bike shrink, as well as offer good purchase on the rough stuff, with monster foot-pegs, lots of real estate for the knees to grip and bars that feel as solid as your local iron bridge. Standing aboard a wicked-up KTM 1090R makes you feel like superman or superwoman. It’s beasty, all-conquering and launches you over mere mortals with a single squirt.

The suspension has benefitted from the same kind of thinking the class-leading enduro ‘boingers’ have been subjected to, but not to the same astounding effect, probably because of the size of the forces generated. There is an abundance of feel at each end for such a big bike, but the magical feel of the enduro range isn’t the same level here. Another year or two, however and I reckon KTM will have mastered that combination of feel and performance it is pioneering in other model ranges.

It will take a longer ride than we enjoyed to fully uncork all this bike’s features – my hand is up for that job! – as the add-on list is huge. For instance, a trick dash system, very similar to operate as my Super Duke R, toggles the TC, rider modes, and ABS modes, which offer road, off road and just plain off. 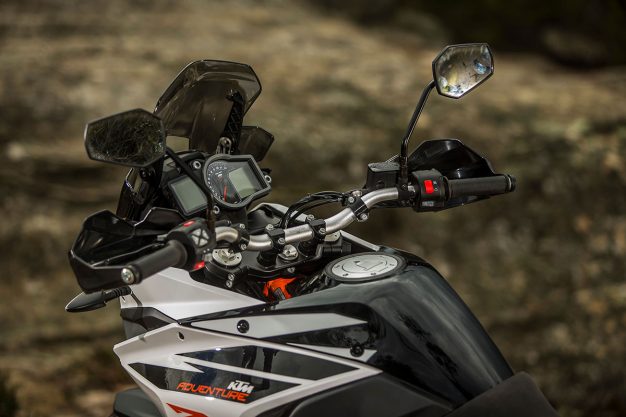 This gateway to customising your own ride means there’s various options for the 1090R and they do make a difference to how the bike behaves. That said, just hopping on the thing and riding in standard everything mode is a heart-starter (in a good way) too!

If your Adventure riding is more on-road than off, or you prefer taking in the scenery while climbing mountains on a KTM, then the 1290 is probably the better bet. If you are one of those riders who says “I wonder where that trail goes” and end up texting your partner after dark, sheepishly saying “home soon”, then the 1090R has your name all over it.

The price of $19,955 very keen for something so well-specced for life in the dirt, too, so take one for a ride if you can – just don’t expect to be home for dinner. Check www.ktm.com.au or our previous Bike post for complete tech information. 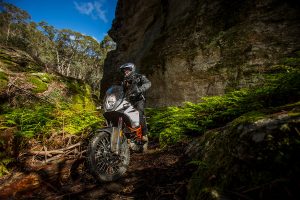 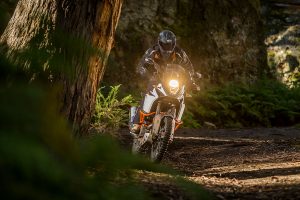 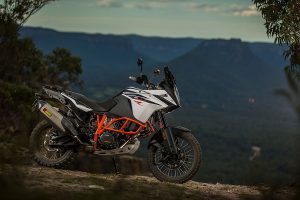 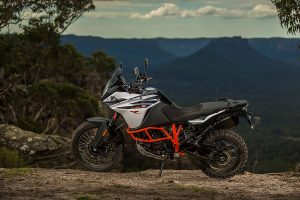 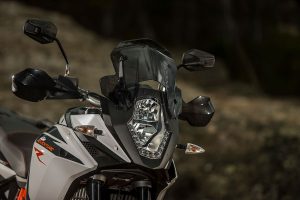 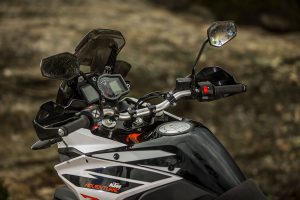 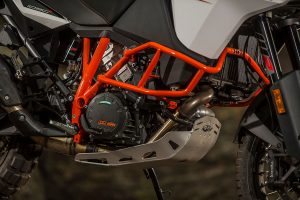 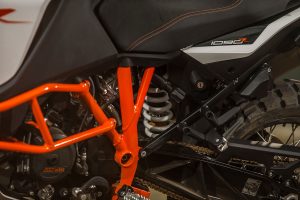 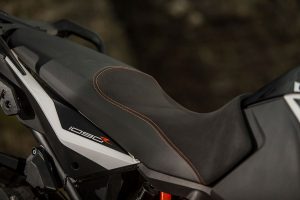 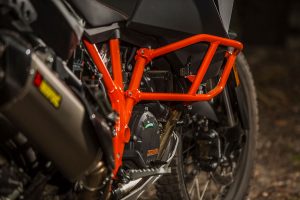 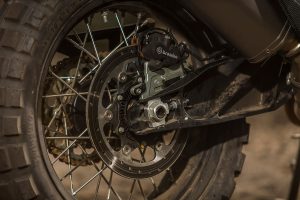 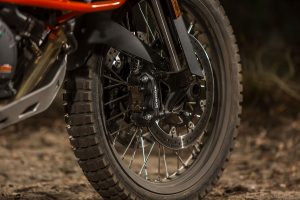