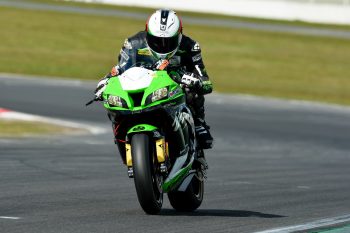 Former Kawasaki BCperformance regular Kyle Buckley has reunited with the outfit while testing took place today at Winton in Victoria, the Queenslander piloting the ZX-10RR made vacant by outgoing rider Lachlan Epis.

Epis initially replaced Buckley for the 2019 Motul Pirelli Australian Superbike Championship (ASBK), leaving him without a ride for this season, however Epis and BCperformance recently parted ways, just four rounds into the series.

Buckley is hopeful of regaining a seat with the Kawasaki squad for the remainder of the ASBK season, with this week’s test acting as a shakedown prior to a final decision being made.

“We have everything in place to be able to finish the year off,” Buckley told CycleOnline.com.au. “Obviously, I haven’t ridden a superbike since the final round of the Australian Superbike Championship last year. So, the first session this morning was a bit daunting.

“So, we’ll see how we go and hopefully everything goes well and into the round itself. We’ll just have to wait and see where we stack up against everyone.

“I believe I have a bit of a road ahead of me in terms of getting back to where I was before. However, the ZX-10RR is great, the Dunlop tyres are working fantastic and the whole team are 100 percent right behind me which makes it so easy. With everything all gelling into one, hopefully it will be a quick and easy process.”

Before departing the BCperformance team last year, Buckley had been involved with the team over a five-year period, which saw him emerge through the Supersport 300, Supersport and Superbike categories with the New South Wales-based operation.