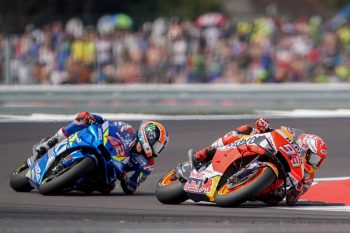 The reigning champion led majority of the 20-lap encounter, fending off multiple challenges from Rins until the last corner, where the Suzuki rider made an intelligent pass to scrape through for the win, demoting Marquez to second.

Despite being forced to accept runner-up honours, the Repsol Honda was able to stretch out his championship lead to a 78-point advantage, which came as a result from Andrea Dovizioso (Ducati Team) crashing out at turn one with Fabio Quartararo (Petronas Yamaha SRT).

“I am happy with the result for the championship, but not the result for the race as to lose out in the final moment after leading is not the best feeling,” Marquez explained. “Spending the whole race in front is difficult here because you use more of everything.

“I tried to go slow for one lap to see if Rins would lead, but he didn’t and I knew Viñales was behind us so I kept pushing. My target wasn’t the race, it was the championship and if the Yamaha riders arrived maybe we could have finished lower.

“In the last turn I had a moment on the front and had to close the gas which let Rins through but we are happy because we leave with 78 points over second but I hope Dovi is okay after a big crash like that, I hope he can recover well and return because it is always better when you earn the points fighting.”

The MotoGP World Championship now heads to Misano on 13-15 September for round 13 of the series.