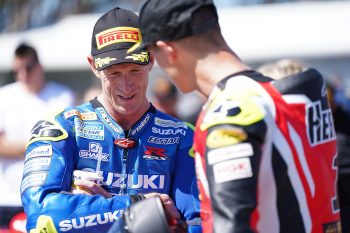 Team Suzuki Ecstar’s Wayne Maxwell will approach Sydney Motorsport Park’s final round of the 2019 Motul Pirelli Australian Superbike Championship (ASBK) with a clear goal – to win races on his way to a second-career crown.

Maxwell has a single ASBK championship to his credit, won with Suzuki in 2013, and he will enter next month’s finals just three points in arrears of defending champion Troy Herfoss (Penrite Honda Racing).

The ever-competitive 36-year-old would have been leading the standings entering Sydney if he was to keep Herfoss at bay in race two at Phillip Island, however, the end result meant that it will be Maxwell’s arch-rival who will carry the lead into round seven. According to Maxwell, it will make little difference in a winner takes all showdown.

“I’m not too concerned about the position, because for us it will be a case of using the same approach that we have since the two unfortunate incidents at round one and also Tailem Bend,” Maxwell told CycleOnline.com.au. “I need to try to win races and maximise the points, which we’ve been able to do pretty well since Morgan Park.

“It’s equal pressure whether you’re leading the championship or not at this stage – it’s the same for everyone in with a chance. I think that whoever’s going to win the championship will have to win races in Sydney. That’s the approach we need to take, to try and win races, but there will be a lot of guys trying to end the season on a high.”

Maxwell and a wide range of ASBK riders were on-track at Sydney Motorsport Park last weekend for a low-key shakedown, in which he drew added confidence from ahead of the championship-decider to be staged between 1-3 November.

“The test was good,” he added. “It’s been the same all year that I’ve been able to turn up, go straight to a lap-time on a second-hand tyre that’s competitive and then work to make the bike better from there as we go.

“Look, there are still a few things that we’re chasing, but I enjoy Sydney and Suzuki’s been super-successful there in the past. I can’t wait for the challenge because this year has been enjoyable with a new team, trying to win races and riding to the maximum.”

While Herfoss leads the title-chase entering Sydney’s final round from Maxwell, DesmoSport Ducati’s Mike Jones – who was involved in the controversial clash with Maxwell at Phillip Island – is also within striking distance at only 4.5 points behind. Cru Halliday (Yamaha Racing Team), Josh Waters (Team Suzuki Ecstar) and Bryan Staring (Kawasaki BCperformance) also stand a mathematical chance.