Frenchman battling inside the top 10 before crashing out. 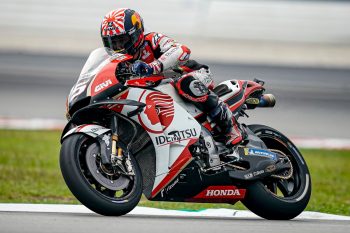 LCR Honda fill-in Johann Zarco is extracting the positives from a strong showing at Sepang’s penultimate round of the 2019 MotoGP World Championship, despite crashing out after being taken down by Joan Mir (Team Suzuki Ecstar).

Zarco, who’s standing in for Takaaki Nakagami, qualified a promising ninth before battling well inside the top 10 during Sunday’s 20-lap encounter, however an aggressive manoeuvre by Mir saw the Frenchman crash suddenly out of the race.

Mir was handed a long-lap penalty for the incident, and while Zarco was evidently frustrated, the race proved to be one of his strongest of the year in just his second time out aboard the RC213V.

“I must be happy about the race,” Zarco stated. “I had good pace and I was back fighting with good guys. I still need to make another step to understand the bike better and ride this Honda better, but I feel there’s good potential that I can go faster and be with the top guys.

“Today has been a good race, it’s always difficult in Malaysia with the warmth, but I was giving my best and controlling things quite well. I had a good fight with Jack Miller for eighth position, I was a bit faster than him and tried to overtake him many times, but he was fighting hard.

“Then I tried to overtake him again three laps from the end and Joan Mir on the Suzuki tried an extreme overtake and totally pushed me away and I could not control the bike. It’s a shame, but what I keep in mind is that I was back in a good feeling and in a better position, so I need to keep pushing and learning and hopefully we’ll get a good result in Valencia.”

Zarco scored a fill-in ride with the satellite Honda squad after being benched by Red Bull KTM Factory Racing, the number five cutting his two-year deal short less than a season in.