Title contender to ride aboard Ducati Panigale V4 R in 2020. 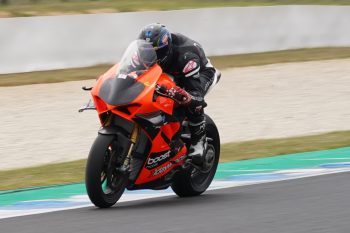 Maxwell was initially signed to a two-year deal with Team Suzuki Ecstar that would see him through 2020, however it was revealed following Sydney’s ASBK finale that Suzuki would withdraw its support from the operation, leaving both himself and Josh Waters without a ride for the upcoming season.

The 37-year-old, who finished third in the 2019 standings, immediately moved to secure a seat for next year, sampling the Craig McMartin-prepared on numerous occasions before finalising plans for 2020.

“I’m obviously very excited that I’m going to be able to make it back on the grid and very excited to be working with Craig [McMartin],” Maxwell told CycleOnline.com.au. “When it comes to the Ducati brand, Craig knows them better than anyone in Australia.

“We have a lot of work to do – we’ve received no support from Ducati, Craig bought the bikes off his own back, so that’s a huge expense. It’s a matter of gaining sponsorship so I can run at the level I need to run at, and to maintain the bikes at the level they need to be at to continue running for 11 years in the top three of the championship.

“I’ve had a few outings on the V4 R, obviously I was unsure whether I’d be able to adapt to the bike – I’ve never ridden a Ducati before. But, I’ve adapted easily – the bike was very good from the get-go and I’m really enjoying it.”