Aprilia Racing CEO Rivola has labels the development as an 'ambitious project'. 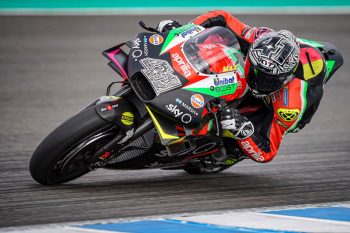 Aprilia Racing is preparing a new RS-GP that will be rolled out at the first MotoGP test of 2020 in Sepang on 7 February.

It’s understood that development has been focused on a new 90-degree V4 engine, which is aimed to offer increased top speed and engine braking.

Aprilia Racing CEO Massimo Rivola has labelled the development as an ‘ambitious project’, believing there are signs of growth and performance ahead of the new season.

“We have an ambitious project in front of us and we know we are not as big as our competitors, but we think that in front of us there is a long way and we are quite optimistic in growing,” Rivola told crash.net.

“I can say this year at least we saw some good signs of growth from the team and in performances. We want to see that more next year.

“We will see the new bike in Malaysia in February and we are preparing for that as it is quite an ambitious programme. With this bike there is a lot of electronics to set up and that can be transferred to the new bike.

“I think we have a lot to learn. I’ve heard many competitors are looking to improve in specific areas but we have the engine, the electronics and many other areas to improve so we need a bit of time to do that.”

The Aprilia Racing squad faces a challenging period ahead following Andrea Iannone’s alleged positive anti-doping test, who is currently provisionally suspended and will face a hearing this week.