Anything less would be 'a disaster' according to MotoGP champion. 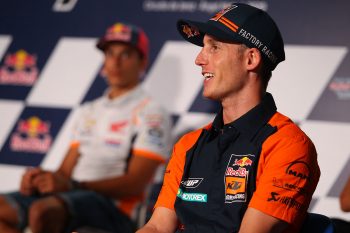 Repsol Honda’s reigning MotoGP champion Marc Marquez has suggested Pol Espargaro will have to be a podium finisher when he joins Honda Racing Corporation (HRC) in 2021, replacing rookie brother Alex Marquez in the factory organisation.

With Alex shifting across to the LCR Honda team as part of a factory contract extension in place of Cal Crutchlow next year, Marc Marquez welcomed the arrival of Espargaro from KTM to Honda, but has set high expectations for him to avoid ‘a disaster’.

“I always respect Honda’s decision because they try to choose the best for the team and the riders,” Marquez commented. “Next year I will have a different teammate, last year I had a different teammate but, of course, the special moment that we had in Valencia with Jorge [Lorenzo], Honda was looking for the best rider available – the Moto2 world champion, Alex.

“This year he’s in the Repsol Honda team, but next year in LCR. That’s a good move for him because being in a Repsol Honda team means being on the podium. For a normal rookie rider the normal step is to start with a team like LCR and good for him that he’ll get all the support from HRC.

“And I’m happy to share the team with Pol next year. It will be interesting to see the level of KTM and Honda and being in the Repsol Honda team means being on the podium. If not, it’s a disaster, so I’m happy with the situation.

“Cal gives a lot of input to Honda and HRC. He’s been in the HRC family for many years with all the official support. It’s Honda’s decision, but it’s always sad when you see somebody moving from the team but in this case it’s my brother, so it’s okay.”

Espargaro won the 2013 Moto2 World Championship after finishing runner-up to Marc Marquez the previous year, but has one single podium in the premier class that he picked up in Valencia at the end of 2018. His best finish in the MotoGP standings was eighth with Yamaha’s satellite effort in 2016, prior to transferring to the works KTM project in 2017.

“I’m 29 years old and, like everyone, I want the maximum from MotoGP. I think in the short term to move in this factory is going to be super-exciting, but at the moment we are just at the beginning of this year, so it’s time to start racing and enjoy this last year with KTM where I still think I can do something very great.”