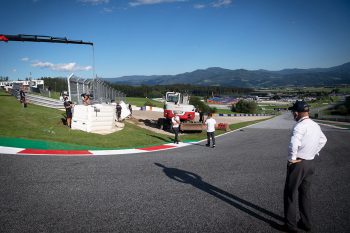 Modifications have been made to the inside of turn three at the Red Bull Ring following last Sunday’s shocking MotoGP incident that saw Johann Zarco and Franco Morbidelli crash at high-speed in the Austrian GP.

The series will host its second-consecutive round at the Spielberg circuit, however, race direction has overseen a series of urgent updates that have been completed in order to minimise the risk of a similar incident reoccurring.

A new wall constructed of FIA fencing, tyres and an air fence has been built to make sure nothing can run on and re-enter the track after both Zarco and Morbidelli’s bikes almost impacted Monster Energy Yamaha teammates Maverick Vinales and Valentino Rossi at speed.