Replacement rider not yet announced at Repsol Honda. 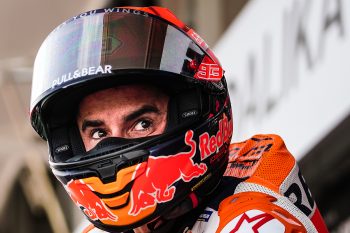 A return date to the MotoGP World Championship is not confirmed for Marc Marquez following the announcement of his absence from this weekend’s Grand Prix of Argentina due to diplopia.

The eight-time world champion crashed heavily in warm up during round two in Indonesia, ruling himself out of the race with a concussion before it was later revealed the impact induced another bout of diplopia.

Marquez showed positive improvements with his diplopia in his second medical check-up after the crash, however, as the recovery is incomplete he will not line up at Termas de Rio Hondo.

“The second neuro-ophthalmological evaluation carried out on Marc Marquez this past Monday has shown a very favourable evolution in the paralysis of the fourth right nerve affected by the fall that occurred at the Indonesian Grand Prix,” Dr Dalmau explained.

“Recovery is not yet complete, and Marc Marquez must follow the established therapeutic regime with conservative treatment.”

2022 is the third successive season Marquez has missed multiple races due to injury, severely breaking his arm at Jerez in 2020 and suffering from diplopia in the final rounds of last year.

A replacement rider for Marquez has not been announced, with HRC test rider Stefan Bradl – who filled in for Marquez in 2020 and 2021- a likely candidate.