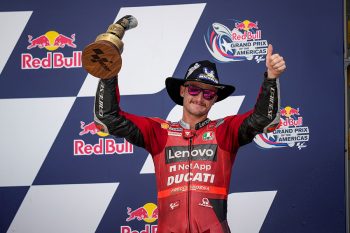 Ducati Lenovo Team’s Jack Miller secured his first MotoGP podium of the season with P3 at Circuit of the Americas (COTA), the Australian admitting the result was much needed for both himself and the team.

Miller delivered his strongest qualifying result of the season to date to line up second for Sunday’s Grand Prix of the Americas, leading many laps of the race to ultimately cross the line 2.3s from race winner Enea Bastianini.

“Honestly, I don’t know if I could have done any better today,” Miller explained. “I knew I didn’t have the pace to escape and leave the group behind me. When Enea passed me, I tried to follow him, but at a certain point, he went wide. I made the same mistake risking going off the track and getting overtaken.

“I knew that Rins was very close behind me. I tried to defend myself, but in the end, he overtook me. I’m really happy with this result, although I’m a bit disappointed having tasted victory for so long. The team and I needed this third place, so I’m happy.”

The 16 points from COTA are a timely boost to Miller’s 2022 World Championship campaign, where he is currently seventh after an up and down season including a technical issue in Qatar’s opener and a fourth place in a wet Indonesia GP. Prior to Austin, the number 43 finished 14th in Argentina, a race where he struggled to overtake.

Miller – the top placed rider on Ducati GP22 machinery – will get his next opportunity to move up the order at round five of the 2022 MotoGP World Championship, taking place at Portimao, Portugal on 22-24 April.