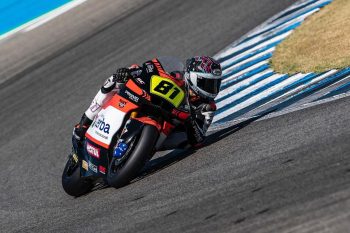 Promo Racing’s Senna Agius continued his strong run of form in the 2022 FIM JuniorGP World Championship as he scored his fifth Moto2 podium of the season with a P3 finish at Jerez.

In what was his first time at the circuit with the current Moto2 bike, Agius qualified fourth, just over two tenths from championship leader Lukas Tulovic on pole.

Notably, Agius again showed strong pace in the warmer conditions and was the fastest in QP2 by 0.318s, however, he remained fourth on the grid as the quickest times were set in the first qualifying session on the cooler track.

Agius spent much of Sunday’s 17-lap bout engaged in a four-way battle for the lead and ultimately held off teammate Xavier Cardelus for the final spot on the rostrum.

“I gave it my all today with the feelings I had,” said Agius. “We need to analyse everything but we are in a good position going into Portimao in two weeks time.”

After the first four rounds of the series, Agius is second in the standings, 29 points back from Jerez race winner Tulovic. His strongest results to date came in the previous round at Catalunya where he scored a commanding double victory, with podiums also at round one in Portugal.

Carter Thompson (AGR Team) notched P18 in the first Hawkers European Talent Cup (HETC) race before he was unable to finish the second outing after a last-lap crash, as Angus Grenfell (Artbox) finished eighth in the last chance race.