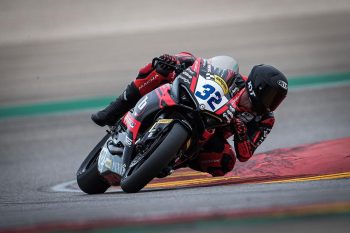 Oli Bayliss continued to progress throughout the opening round of 2022 WorldSSP at Aragon, positive changes ahead of the second race allowing him to take a step forward.

Bayliss, 18, finished his first qualifying session with the Barni Spark Racing Team in 26th, before riding to 21st in the opening 15 lap race of the season.

The second race – also 15 laps – saw Bayliss significantly reduce the margin to victory, from 42 to 33 seconds, and improve his fastest race time by close to a second on his way to finishing P19.

“Although it doesn’t look like a good weekend, it was,” Bayliss shared. “The Barni Racing Team made a few changes for race two, and made step forward. One more little step and we would’ve been in the next group.

“The field is very strong and it will be a big learning year. However, the team and I will keep giving 100% and keep working hard as  possible.”

2022 is Bayliss’ rookie year in the WorldSSP championship, and he experienced his share of difficulties in the pre-season when he fractured his ankle testing in Portimao.

The number 32 is expected to be joined by fellow Australian Tom Edwards at round two of the WorldSSP championship at Assen, with Ben Currie’s entry unconfirmed in The Netherlands following his recovery from a pre-season motocross crash.